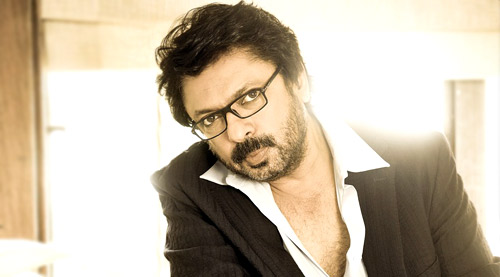 Sanjay Leela Bhansali who has been honoured with the Padma Shri this Republic Day talks with Subhash K Jha about the joys of honours and recognition.

What does the Padma Shri mean to you?

It feels wonderful. It means your work has been recognized by the Government. It just spurs me to work harder. I've been working for 24 years making films. I started by directing songs. So what a journey it has been for me!

Your Devdas and Black have won the highest number of awards. What does this kind of recognition mean to you?

I feel very fortunate that my films have got this kind of critical acclaim. At the same time they've been able to make money at the box office. This balance of appreciation and success is not easy to achieve. More so, because my characters are suffering human beings. They are not easy to connect with the audience. Still I get a lot of love from my audience. I am grateful for that.

It's your passion for the art that sees you through?

Making movies is all I think about. Cinema is all I live for. After the hard work that I put in I feel blessed when it's appreciated. In so many ways I felt blessed when we took Devdas to Cannes. In many ways it familiarized the Western world to the Bollywood formula. Then came the opera Padmavati which I did in Paris. It was one of my most glorious moments as an artiste. All this is highly motivating for me.

But a lot of people don't connect with the opulence of your vision?

The disapproval is also important to me. Love, hate, contempt, affection...It all adds up to make a complete life. Every reaction is important to me. There is a certain style I have of putting the story across. Many like it, others don't.

How much of your personality goes into your films?

The way I make my film is the kind of person I am. If today the Government of India has connected with my cinema I feel very reassured and grateful. I just hope an honour like the Padma Shri makes me work harder. I am proud of it. But it shouldn't make me arrogant.

Suffering is a constant in your protagonists. Is Bajirao in Bajirao Mastani also a pain-lover?

I feel suffering and pain is an important part of every human being's life. And I don't just address the question of pain, I also show my heroes overcoming that pain. In Devdas the protagonist's life ended in tragedy. But he remained consumed by love and said yes to the pain that accompanied his passion for love. Rani in Black, Ajay Devgn in Hum...Dil De Chuke Sanam or Hrithik Roshan in Guzaarish overcome their suffering and come to terms with it.

Does suffering play a part in Bajirao Mastani?

Bajirao Mastani is a very intense love story. Yes, in many ways Bajirao is also a man who suffers with passionate intensity. It's the dilemma of a man in love. It is a primarily a love story. At the time when it happened it may not have seemed like such a passionate happening. That a film is being made on the man who loved two centuries ago is a triumph of that love.

How different is it going into a real life?

It's still a love story and love is such a universal emotion. Every film has its own destiny. But there are certain binding emotions that don't change. Bajirao Mastani is my biggest film in terms of scale.

Is bigness of scale a pre-condition in your films?

If I made a lavish Devdas I've also made Khamoshi: The Musical, Saawariya, Black and Guzaarish which were relatively smaller films. Bajairao Mastani is my toughest film to make.

What keeps your passion for cinema from flagging?

Cinema is my life. And the more I work the more I fall in love with life. It isn't so much the films that I create that I love as much as the process of creation. I am so happy I am alive. Because as long as I am alive I can make films.

What ambitions do you still harbour?

I have no ambitions! I just make my films. Whatever I get in terms of success I accept and I don't sit back to enjoy it. I feel accomplished.

Does your cinema isolate you from social interactions?

I find it very difficult to go out there and socialize. But I meet a lot people while making my films. Each film creates a family. After it's complete the family is dismantled. That's life. I've learnt to take to enjoy my own company. I've come to terms with my life. I've realized my work is my life.

From Khamoshi: The Musical to Bajirao Mastani, how much have you evolved as a person and a human being?

Oh, tremendously! The search for excellence never ends. As a person I've become calmer. Initially during my days of struggle there were too many obstacles. I was unsettled. Today I am no longer disturbed by the obstacles. I am much happier today than I was earlier. I'm far more at peace now.

What is the one thing that you'd like to change in your life?

The dÃ©cor of my study.