Just like the original Arjun Reddy, the Hindi remake of this Telugu blockbuster, Kabir Singh has set the box office ringing. And Sandeep Reddy Vanga is a happiest man currently! The director is obviously thrilled to see the way his film is creating waves across the nation and it is undoubtedly a special moment for the film’s leads Shahid Kapoor and Kiara Advani. The two actors were seen celebrating their special moment on Instagram! 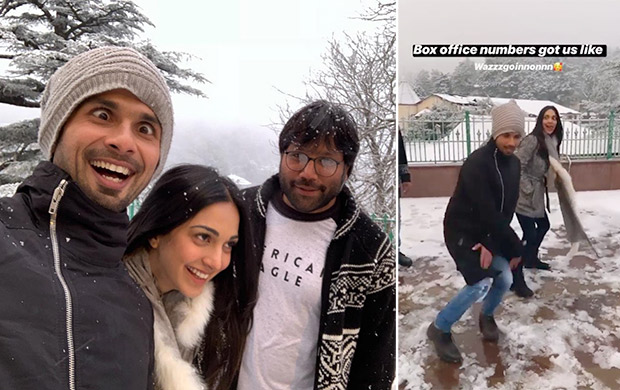 While Shahid Kapoor posted a quirky photo on Instagram, Kiara Advani shared a boomerang video of them dancing against the backdrop of snow-capped mountains. Kiara shared this happy video saying, “Box office numbers got us like Wazzzgoinnonnn.” And here’s a look at the poster shared by Shahid Kapoor:

Speaking of Kabir Singh, the film talks about a love story between Kabir and Preeti that blossoms against the backdrop of a medical college. While Preeti is married off another man, a heartbroken Kabir resorts to drugs and alcohol as he walks the path of self-destruction. The film hit the big screens last week, on June 21.

As for future projects, Shahid Kapoor will now dedicate his time for the film based on boxer Dingko Singh. On the other hand, Kiara Advani will be seen in the Kareena Kapoor Khan starrer Good News, Sidharth Malhotra starrer Shershaah and Akshay Kumar starrer Laxmmi Bomb amongst others.

Also Read: Kabir Singh gets a spectacular opening, shows being added in theatres across the country