Just two weeks ago, it was reported that Akshay Kumar and Katrina Kaif are all set to recreate the iconic song 'Tip Tip Barsa Paani' from Mohra in their upcoming cop drama, Sooryavanshi. After several song recreations in his previous films, Rohit Shetty is set to recreate yet another classic which originally starred Akshay Kumar and Raveena Tandon. 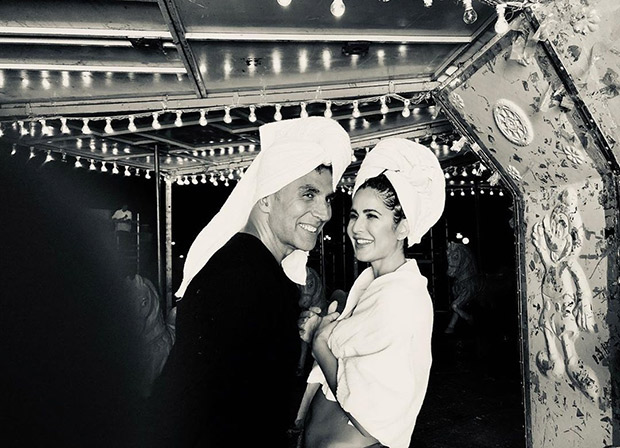 The song was filmed at Ramoji Film City in Hyderabad. Katrina Kaif, on Tuesday, teased the fans with a candid photo of her and Akshay Kumar from the shoot. The pair was all smiles in the black and white photo. The actress is dressed in a saree while wrapped with towels wrapped around her. Since the song was shot in rain, they seemed to be reacreating it in the same way. She captioned the photo, "Singing in the rain."

Akshay Kumar, a few days ago, had thanked Ratan Jain, the head honcho of Venues to grant them the rights of the song. "I would’ve definitely been disappointed if any other actor would’ve recreated Tip Tip Barsa Paani,a song which has been synonymous with me & my career & I can’t thank Ratan Jain ji enough. At times like these you realize,we may have come a long way but we also go back a long way," he wrote on Twitter.

Also Read: Akshay Kumar to take a break from Sooryavanshi to shoot a special song for Housefull 4