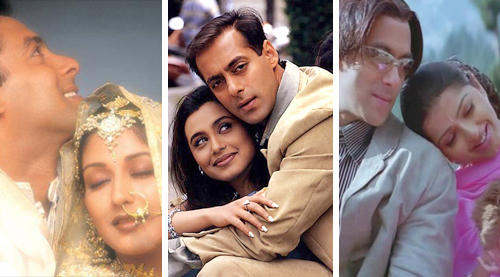 The golden run
Meanwhile, personally for Salman, things were going in his favor. His family film Jab Pyar Kisi Se Hota Hai was a decent success which was followed by a surprise hit in the form of

Bandhan. Really, till the day of release no one expected this film to do even reasonable business but unpredictability is the name of the game with the film bringing in big bucks. As for

Kuch Kuch Hota Hai, Salman enjoys the best entry till date for a special appearance in this Karan Johar film which was a super hit.

Har Dil Jo Pyaar Karega meant that Salman had turned out to be Mr. Reliable after spending a decade in the industry.

However, just when it seemed that Salman wasn't stepping a wrong foot anywhere came flops like

Tere Naam, Garv and Mujhse Shaadi Karogi meant that Salman was not just in continuous circulation but also held on to his position in the Top 5 leading men in Bollywood.

Different genres
Refusing to be slotted in any particular genre, Salman continued to mix it up all. This is why despite a film of his turning out to be a success or a failure; he never stuck on to a particular

Still, it was quite some time since Salman had enjoyed a huge success. Though there were on and off hits coming his way, a quintessential massy money spinner was missing for long, something that he

got in Partner. The film was a huge success and though it was immediately followed by Salman's first (and only) stint with a production from the West, Marigold: An Adventure In India,

one knew that he could never be taken seriously.

This is the reason why even though a bad phase followed in entire 2008 with God Tussi Great Ho, Heroes and the biggest of them all, Yuuvraaj falling like nine pins, there was no one

who dared to write him off. It's good they didn't because just round the corner, there was Wanted waiting to strike BIG.

Mass appeal
Wanted brought to fore an altogether different dimension of Salman Khan. Despite a delay in the making of the film, despite a changing hairstyle in every second scene, despite allegations of

sleep walking through his role, despite his pairing with an actress who was much married now (Ayesha Takia), despite a relatively slow start at the box office, Wanted ended up being a super

success at the box office.

This was one of the rare films to see a massive escalation in collections not just on the weekend but also weekdays, hence turning into a roaring success. The film proved to be one of the biggest

hits of 2009 and also brought a complete turnaround of media in his favor. His only film in years to get consistently fair support from media as well as critics, Wanted was enormous and

As is known to one and all, Dabangg not only managed to score amongst Salman's 'perceived' target audience - masses in interiors' but also brought out people from the comfort zone of their

living rooms to the neighborhood multiplexes. The film actually went on to break the opening week record of 3 Idiots and even as the director has publicly admitted that he didn't quite have

total control over the proceedings with Khan brothers literally calling the shots, Dabangg only went on to prove that Salman would continue to work in one such big mass film year after year.

The Century hitter - The 100 Crore King
By now, it was quite apparent that Salman Khan was on a roll. Yes, there were disappointments in the form of Main Aurr Mrs. Khanna, London Dreams and Veer but Salman being Salman,

there was always something big on the anvil, something which can well be judged from the series of Rs. 100 crore, Rs. 200 crore and now Rs. 300 crore Blockbusters that he has given in a row.

Dabangg while Kick went on to mark the Rs. 200 Crore Club debut for Salman Khan. The biggest of them turned out to be Bajrangi Bhaijaan that smashed all records for him and

many other superstars, while entering the Rs. 300 Crore Club.

Now that Prem Ratan Dhan Payo has released and Sultan is carrying excellent vibes too, rest assured, Salman would be delivering at least one biggie as a central protagonist every year

for next half a decade at least. What would Salman do after that? Well, from someone who is as unpredictable as him, one never knows. After all he could well have some more surprises up his