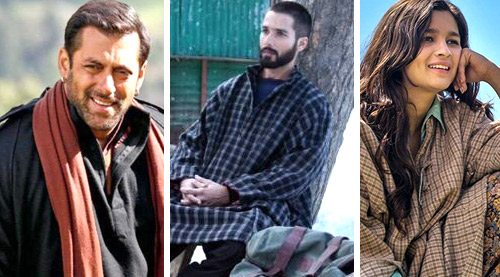 Bajrangi Bhaijaan releases next Friday and it has a major portion of it shot in Kashmir. While Salman Khan clearly enjoyed all the love and affection that he received in the state, director Kabir Khan too is expected to bring in the level of authenticity that is expected from him when it comes to shooting in the paradise that has stunned for centuries. With the kind of grand canvas that the film boasts of, one can be rest assured that Kashmir would look more beautiful than ever when captured through the lens of cinematographer Aseem Mishra for Bajrangi Bhaijaan.

Back in the 60s and 70s though, shooting in Kashmir was quite a regular affair, what with films like Kashmir Ki Kali, Junglee, Jab Jab Phool Khile, Janwar, Himalay Ki God Mein, Kabhi Kabhi, Love In Kashmir, Aap Ki Kasam and Roti amongst others set in the valley. While in the recent past there have been certain portions of Saat Khoon Maaf, Highway and Yeh Jawaani Hai Deewani filmed in Kashmir, here is looking at some other notable films which had Kashmir as a background.

Let's look at some of the films that had Kashmir crucial to its plot. Surprisingly, almost all of these have a terrorism angle to them, which is a sad state of affairs, considering the fact that half a century ago the valley was set as a location for love and romance. One hopes (and believes though) that the story in Bajrangi Bhaijaan would be different.

It was after a hiatus when one saw a film which had its base set in Kashmir. The Vishal Bhardwaj film turned out to be a rare film that had an out and out Kashmir setting to it, and it turned out to be mighty impressive one at that. Of course one (expectedly) saw all the snow around, but it was the manner in which local life was demonstrated in the Shahid Kapoor starrer that one couldn't help but appreciate in awe.

Think Kashmir and one can't help but remember Dil Se as one film where Kashmir was presented quite beautifully. Though Mani Ratnam took the film to various cities of the country, Kashmir was notable since the character played by Manisha Koirala was an extremist of Kashmiri origin.

The film with Sanjay Dutt in lead had a troublesome time in Kashmir as Bipasha Basu wasn't too comfortable with the idea of shooting in the valley. She did arrive at location, only to rush back to Mumbai since she was unhappy with the security arrangements. When she returned, director Rahul Dholakia couldn't shoot much as he fell sick. Later, a large part of the film had to be shot on sets in Mumbai.

Director Shoojit Sircar is fascinated with the idea of shooting at live locations, something that he has shown in Madras Cafe as well as Vicky Donor. These traits were quite visible when he started his career with a rather difficult film Yahaan. The film told the story of a local Kashmiri girl and an Army man. Back then the Jimmy Sheirgill-Minissha Lamba film was a flop but today it is remembered for its sensitive treatment.

There was a time when Yash Chopra frequented Kashmir quite often. However over a period of time he moved to other scenic locations. For his swansong Jab Tak Hai Jaan though he managed to shoot in Kashmir despite tension surrounding the locations. Eventually, he and Shah Rukh Khan made sure that audience got a taste of vintage Chopra magic, courtesy scenes shot in Srinagar, Pahalgam and Gulmarg.

When Farhan Akhtar decided to set his Lakshya in Kashmir, it was a daunting task indeed as he had a mega cast in hand with Amitabh Bachchan and Farhan Akhtar leading from the front. Moreover, to have a large crew set in Ladakh in an Army setting was a daunting task no less. Still, he managed to do that for his ambitious film which unfortunately failed to do much at the box office.

The very title of the film signifies the stage and setting of this Vidhu Vinod Chopra affair which had major portions set in Kashmir. One of the first commercial films to bring fore the topic of terrorism in the valley, it had Sanjay Dutt leading the show with (then) newbie Hrithik Roshan starting his Bollywood sojourn. Needless to say, the film was shot quite beautifully at some enticing locations by 'local' Vidhu Vinod Chopra.

Though quite a few filmmakers have made a lot of brouhaha about shooting in Kashmir, director Piyush Jha went on record to state that he found it all very comfortable as there were no troubles while he was filming Sikandar. Yet again the film dealt with the topic of terrorism, while told from the point of view of a young boy and a girl. The film got some critical acclaim though commercially it couldn't cover a distance.

With Santosh Sivan as the man calling the shots, one was rest assured that Tahaan would be shot beautifully. A fable-like affair which was set in Kashmir, the film told the story of a boy and his donkey. The film was hardly marketed and disappeared without any trace. What one remembers though are some snow peaked mountains that one saw on screen as well as an endearing act by child artist Purav Bhandare.

Half the Bollywood industry - LOC Kargil

Shot extensively in Leh and Ladakh, LOC Kargil was a magnum opus by filmmaker J.P. Dutta who decided to make the film as most ambitious war film ever in Bollywood. Hundreds of crew members traveled all the way from Mumbai to Kashmir and extensive arrangements were made to ensure that the extended schedule went on without any hassles whatsoever. The film was shot well but only moderately successful.

The film is notable as it was a dream project by director Raj Kapoor. However, following his demise, the film was taken forward by his son Randhir Kapoor. Set as a love story between a spy and a Kashmiri girl, the film largely played as a love story. The valley was shot quite beautifully, though ever since then most of the Bollywood films have largely presented Kashmir as a terror infested state. Heena was a big hit.