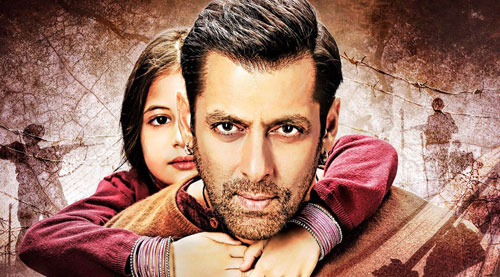 Just a little over a fortnight remains for the release of the biggest film of the year so far, Bajrangi Bhaijaan, and the hype for the Salman Khan starrer has reached such peak that it could well arrive on the coming Friday and still attract mighty footfalls. However, the makers are not in mood of something which is just good or excellent. The idea is to arrive in a spectacular manner and justify the 'big release' tag that Bajrangi Bhaijaan has been boasting of ever since it went into production.

"The film cannot be second best. Period," says a source attached to the film, "It has to be as big as it gets, both in terms of release as well as the revenue that it generates. Salman's Eid releases are special. Last year we saw the kind of havoc that Kick created on its arrival. The film turned out to be the biggest Salman Khan film ever. Before that the record was held by Ek Tha Tiger and that too was the biggest Eid arrival for Salman, before Kick happened. The story was same for Bodyguard (Eid 2011), Dabangg (Eid 2010) and Wanted (Eid 2009). How can you imagine anything lesser for Bajrangi Bhaijaan?"

No wonder, those in the industry pretty much understand that as well and as is the kind of respect that is meted to big ticket blockbuster releases, even Bajrangi Bhaijaan is seeing a solo arrival. This isn't all as no other quintessential Bollywood commercial film is releasing a week later either, hence giving Bajrangi Bhaijaan an open fortnight to play around with.

"Not that anyone is surprised though; it was bound to happen," says an insider, "When a film arrives on a record number of screens, and that too with a hefty price tag attached to it, the need of the hour is to allow an uninterrupted run and let it run its course. You need at least a couple of major weekends for a film to rake in moolah. Also, when there is set audience for a Salman starrer, why to spoil the party with a needless release thrown in between? That would only end up being counterproductive for the film in question, as well as exhibitors and distributors."

For Salman, this pretty much sets the stage for a record outing. The two major records that he needs to break pronto are the ones that he set for the opening day (Ek Tha Tiger) and the opening week (Kick). Once that is settled, it would be time to start looking at the lifetime collections.

"What certainly works in favor of Bajrangi Bhaijaan is its very title," says a prominent filmmaker, "It is not just the 'bhaijaan' factor that would pull in a staple Muslim crowd which anyways throngs each of Salman starrers every Eid. The presence of Bajrangi brings in a strong Hindu audience as well which would only make the festival of Eid further bright. The whole cross-religion element right at the title stage has been very well integrated into the narrative of the film. You couldn't have a better harmony generating title than this."

Since Salman too is establishing a good balance between his larger than life persona as well as a simple character that he is required to play, there is some reinvention in sight. That said, one is still led to believe that a shirtless Salman would be pretty much on display even as he takes on the baddies in the film's climax.

"Well, wait and watch to know whether that happens or not," quips a source from the production, "After all, it is a Salman film and there have to be certain elements that are designed to play on for Salmanaics. But as you rightly suggest, Bajrangi Bhaijaan has a balanced portrayal by Salman. There won't be any frivolity by him. Not that his fans would mind that, but then the film doesn't demand any such act."

As for Kareena Kapoor Khan, it is time to go one up over the opening that her Singham Returns had taken last year. For the actress who has gone ultra-selective in her choice of films since marriage, Bajrangi Bhaijaan was an offer made to her that she couldn't say no to.

"Very importantly, it is achche din for Eros," the source adds, "With Tanu Weds Manu Returns, they have made five times the money that they spent on production for the film. Now Bajrangi Bhaijaan is set to be their biggest release till date and a Thursday release for Bajrangi Bhaijaan (on July 16) gives them at least 15 days, right till July 30, to make merry. Before their next big release Bajirao Mastani (which arrives in December), it is Bajrangi Bhaijaan with which they would be hoping to gain a first ever entry into the Rs. 200 crore club."

Salman has already scored five centuries (Dabangg, Bodyguard, Ready, Dabangg 2, Jai Ho), one near double century (Ek Tha Tiger) and one neat double century (Kick) already. The stage is set for him to score another big one this Eid.