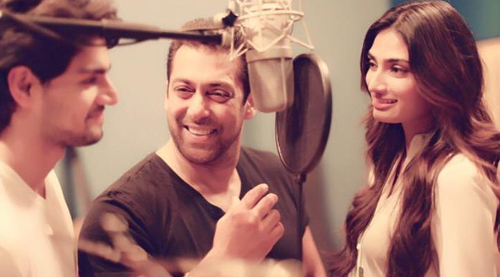 This year, two of the biggest all time blockbusters have been Bajrangi Bhaijaan and Tanu Weds Manu Returns along with Baahubali and ABCD 2. While

Salman Khan, Kangna Ranaut and Varun Dhawan were the stars of the show in their respective films, it was pure content that worked for the S.S. Rajamouli created visual affair. While these films

were marketed and pitched quite effectively to reach out to their target audience and turn into 100 crore affairs, the presence of stars in most of these films was an added bonus.

However for Hero, it is going to be an altogether different strategy being adopted. Since the film features Sooraj Pancholi and Athiya Shetty, two of the hottest debutants on the scene, it

is a major responsibility indeed for Salman Khan, Nikhil Advani and Eros which has come on board.

"Yes, we have to strategize differently," confirms a source attached to the film, "Whatever genre does a film belong to, you have to come up with new ideas. You can't have a routine kind of

"Since Salman is there and Hero is his production, he will obviously play a very important role in the whole plan. Meanwhile, Eros is making sure to present and distribute the film in a

right way. They are going to pitch Hero well across the globe," a trade source adds.

Not many newcomers get an opportunity to be launched on such a huge scale.

"The makers are doing that for sure though," the source adds, "Sooraj and Athiya are the hottest newcomers of the year so far. After Tiger Shroff and Kriti Sanon last year, it is going to be Sooraj

and Athiya this year. For Hero, the duo needs to be introduced well before the audience."

The outcome would be known on 11th September when the film releases all over.