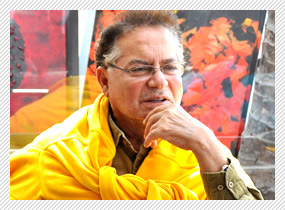 He has never been known to mince words, and tells it like it is. Salim Khan, the handsome son of a high-ranking police officer in Indore, came to Mumbai to act, did not become very successful despite some lead roles, and began writing films as he had a flair for it, beginning with the Ashok Kumar-Jeetendra-Mala Sinha's average success Do Bhai in 1970. In 1971, he teamed up with Javed Akhtar to form the cult Salim-Javed duo, that spun blockbusters like Haathi Mere Saathi, Seeta Aur Geeta, Zanjeer, Yaadon Ki Baraat, Deewaar, Sholay, Chacha Bhatija, Don, Trishul, Shaan, Kranti, Shakti and Mr. India in the next 17 years. When his partner split with him, he continued solo for the next decade, writing films like Naam.

Today, Salim Khan is busy writing articles, distributing movies and overseeing (officially or otherwise) the scripts of films starring his sons, including of course Salman Khan. In a candid conversation, the veteran writer, known for his no-nonsense stand on matters from cinema to everything else, speaks his mind.

Today, along with the mainstream movies that do stupendous business, we have an eclectic bunch of different cinema like Gangs Of Wasseypur and Shanghai. What have you to say about this trend?
I think that there are only two kinds of films - good and bad, or interesting and uninteresting! If a film is neither good nor bad, it is average - that is the only third kind. These labels like art cinema, offbeat cinema or parallel cinema are artificial. There is nothing like personal cinema. My guru, veteran filmmaker Mahesh Kaul would say, "If you want to make a statement or communicate an important message, the show should be houseful, and if you want to make a commercial movie, then the house should be full too!"

My grouse with these filmmakers is that these worthies have been lured into this profession after watching the great works of actors like Raj Kapoor, Dev Anand and Dilip Kumar and filmmakers like V.Shantaram, Rajsaab again, Bimal Roy, Guru Dutt and S.Mukerji and now, after spending four years in some Indian or overseas film school, they suddenly turn apologetic about our own cinema and have contempt for it!

Satyajit Ray has admitted on record that he could never have made Sholay. He was a great filmmaker and that's why he accepted the truth that a cinema different from his that was loved by the people across the nation was more difficult to make. But today, incapability is made into a virtue! I can understand someone making Haathi Mere Saathi or Dilwale Dulhania Le Jayenge and then saying that he would now like to make different, personal films, the way Guru Dutt made a Pyaasa after Aar Paar and Mr & Mrs 55. Gautam Buddha left his wealth and kingdom to become a faqir. These people are like those faqirs who sit outside places of worship - they do it because they have no choice!

And in their highbrow attitude, they also forget the fact that all the films that are watched by all the strata of society also in effect run the houses of everyone down to the gatekeeper of a movie-hall and the man who sells popcorn to the audience! And they have this crab mentality of pulling such filmmakers down even when they do not get anywhere!

This is the reason why I have great regards for Mahesh Bhatt, who when he signed me for Naam, had total conviction in my work and sensibility. Having made films like Arth and Saaransh, he told me that he would totally go by my script, and the result was there for all to see. Films are about teamwork, and direction begins where writing stops. For a director to make a mark, his screenplay writer has to be good too.

Finally, these artificial classifications are there in India alone. Steven Spielberg will never run down films like Ben-Hur, My Fair Lady and The Godfather, which must have first attracted him to turn filmmaker.

Apart from the blockbusters, have you been impressed by any films recently?
Of course! As I said, there are only interesting films and uninteresting films. I loved A Wednesday, Chillar Party, Vicky Donor, Kahaaniâ€¦ aur bhi filmein hai.

What do you have to say about the spectacular success of Ek Tha Tiger?
That contrary to what people think, its success is neither a fluke nor an ittefaq. I was the first to watch the film and it was so foolproof that I told them that it was a 110 percent hit! I was asked for my opinion and suggestions at that stage but there was nothing that needed modification. In fact, I was so confident about ETT that I came home and told Arbaaz (Khan) to hold selling the rights of Dabangg 2 till Ek Tha Tiger released as it would help get a better price.

You are almost always involved in your children's films. Why is it that so far you have only been credited in just a couple of films?
The tradition of script-doctors is very old in Hollywood, and it's when I get payment that I am officially credited! But I must stress that involvement is a misunderstood term. For me, 'involvement' is when the motive is good, and when it is for the betterment of a film. There is a different kind of involvement that is ego-based and selfish, which usually has a bad effect and is better called interference. Most intelligent actors always get involved in their films, including my son Salman.

What is your own take on Salman Khan's unprecedented success streak more than 20 years after he began shooting for his first film Biwi Ho To Aisi on September 9, 1987?
It was long overdue. I have always said that he had not delivered what he promised, or was capable of, till now. I always told him that he had to be serious and that the moment he became serious he would go where he is today. Salman always had it in him - he was credible in the fight sequences, could dance well, and was good at romance, comedy and drama.

So why do you say that he was not serious?
By that I mean that he took undue risks. There are so many times jab ussne dosti mein film kar li (accepted films to oblige friends), or did films because someone told him a sob story. He has done a record number of guest roles that did not save the films but added flops to his name, because the moment he came in for a cameo that needed a few days' work it was projected as a Salman Khan film, and that disappointed audiences.

Post-Wanted and Dabangg, Salman Khan is more or less branded in a certain image.
I do not see anything wrong in that. John Wayne spent a lifetime in one kind of role and became a legend, so did Clint Eastwood who when he experimented did not work. There is nothing wrong in capitalizing on one's strengths because audience expectations must be met. Helen was best at dance, Meena Kumari at a certain kind of role, and so also so many famous comedians.

Today, with the kind of monies his films get in, their budget has gone up so much that you cannot take a chance. You cannot show him as a loser, a man who wants to commit suicide, or as a weakling.

What would be your advice to your son at this point?
I have always told him never to get excited with success or depressed with failure. Success is not a permanent phase, and everyone keeps growing older. Today, a Salman Khan film promises wholesome entertainment and he has to deliver each time.

After writing for so many decades, how important do you think are scriptwriters?
A film can be made without actors, shot without directors, but cannot be made without either raw stock (film) or writers! But when everyone watches a film and claps for the dialogues, they do not get to see the hundreds of pages that were torn and thrown away along the way!

Why not write scripts today?
I am writing for various publications on various topics including cinema, religion, politics and more. This takes care of my desire to write, while all my other activities do not allow the luxury of months of time and focus needed on doing a script. And today, I would rather be known as a good human being and a fair, honest person rather than a star writer.