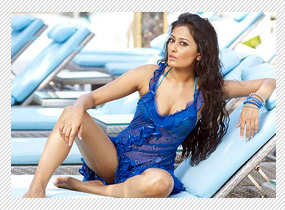 Just recently South superstar Ileana D'Cruz made a very good debut with Barfi! and it is pretty apparent that she would be enjoying a much longer stint in Bollywood now. Close on her heels arrives Nidhi Subbaiah, another popular name from down South, who would be seen as a leading lady in Ajab Gazabb Love opposite Jackky Bhagnani. However, despite being in the industry for three years and around ten films to her credit, Nidhi doesn't mind being treated as an absolute newcomer as far as her brush with Bollywood is concerned.

"I understand that when it comes to Hindi films, I need to start from scratch. I can't be resting on my laurels that 'Oh, so since I have acted in 10 odd films and have earned a good name for myself, I have to be considered as Ms. Know All'. That's wrong. I think it is totally fair if I get the kind of treatment which is otherwise reserved for a newcomer."

While it is pretty much expected that the month to follow would keep her mighty engaged, Nidhi admits that as of now she hasn't even planned what she would be doing post the release of her musical rom-com.

"That's the way I am", she laughs, "I know that it may sound a little clichÃ©d when a heroine says that she is still exploring for options. But really, for me it is always like that. As a matter of fact, I didn't even plan to be where I am right now."

Considering the fact that Ajab Gazabb Love is directed by Sanjay Gadhvi of Dhoom fame, it is expected that Nidhi would make a good looking debut for sure. Since Sanjay has a knack for presenting his leading ladies quite stylishly, Nidhi is happy that the glamour side of hers has been brought to fore in the film.

"That's true", she smiles, "He has presented Aishwarya Rai Bachchan and Bipasha Basu (Dhoom 2) so beautifully in his films that I wasn't worried about how I would appear on screen. In fact 2-3 weeks before I started shooting for the film, Sanjay sir and I sat down with the stylists and finalized the costumes. It was so sweet on his part to do so."

While the attitude of leading ladies has changed today when it comes to skin show, how conservative or liberal is she in that aspect?

"I would be comfortable doing anything", she says immediately, "I learnt this lesson quite early in my South films that at the end of the day, I am an actor and hence can't have too many reservations. Acting and looking good is giving my bread and butter after all."