Saif Ali Khan and his son Taimur Ali Khan are enjoying some quality time together in the Maldives. After Kareena Kapoor and her younger son Jehangir Ali Khan left for the UK, the father and son pair took a flight to the Maldives for a vacation. For the unversed, Kareena is in London filming for Hansal Mehta's upcoming movie. 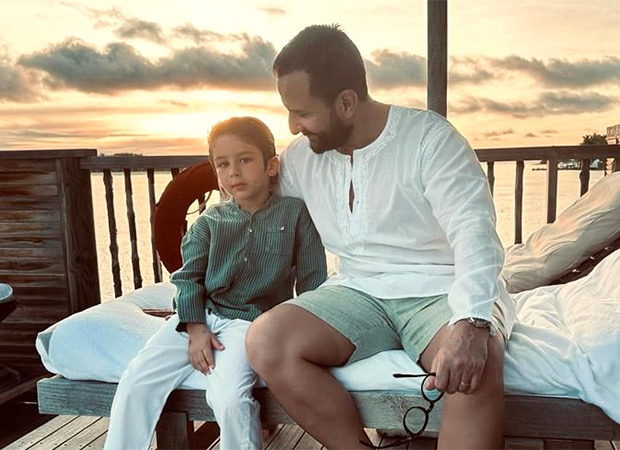 In a photo making rounds on the internet, Taimur can be seen posing for a click with his father Saif. In the photo, the father-son duo can be seen sitting on a beach chair at their resort. On the other hand, the sea is seen in the background. While Saif sports a casual look in a short white kurta and shorts, Taimur is in a sweatshirt paired with white pants and shoes. They seem to be in the middle of a conversation.

Talking about Bebo, she had taken a flight to the UK for Hansal Mehta's upcoming film's first shooting schedule. Though she came back for Diwali after the festivities, she took a flight back to London from her home country. She was seen with Jehangir at the airport. Saif and Taimur departed for the Maldives on the same day.

She will play a detective in the upcoming Hansal Mehta directorial, which is said to be a murder mystery. While she was last seen in Laal Singh Chaddha opposite Aamir Khan, Saif saw the release of Vikram Vedha last month. The neo-noir film also starred Hrithik Roshan in the lead.

He will be next seen in Adipurush. It will be his second collaboration with director Om Raut. Saif will play the antagonist, while Prabhas and Kriti Sanon will be seen playing the lead. The upcoming period drama is slated to release on January 12, 2023.

Also Read: Saif Ali Khan reveals Taimur is very protective of Jeh; says, “He allows himself to be beaten by Jeh”