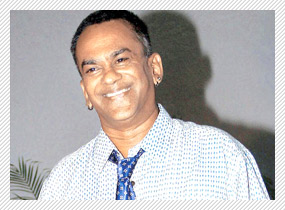 The 59-year old Goan singing sensation Remo Fernandes who created ripples across Indian pop charts with his songs in the 1980s and 1990s including a much beloved tribute to Mumbai entitled 'Bombay City' is back with David. Remo has sung and composed 2 tracks in David.

"It's my comeback to Hindi cinema. My link with Hindi cinema has been re-established after many many years. I love it! I've sung two tracks and composed music for them in David. I also make an appearance in the film. I won't tell you where," says Remo.

Recalling the song on 'Bombay City' Remo says, "That song is as relevant today as it was when I wrote and sang it. Nothing has changed. Every line of the line lyric is still applicable. I sang, 'Bomb bomb Bombay'. Bombs did explode in Mumbai but they couldn't kill the city's spirit."

Remo has been associated with Bollywood since 1987. "I am blessed to be still around. So many one-hit wonders have come and gone. I've managed to stay on although no music company has been willing to release any album of mine for the last one decade. In spite of that, I'm here. I guess like the song says, somewhere in my youth or childhood I must have done something good. I started with two diametrically opposite films Pankaj Parasher's Jalwa and Shyam Benegal's Trikaal during the same year. Both of course were Goan in flavour."

Looking back at a good three decades of musical ascendancy Remo says, "I don't know what the formula for longevity is. If I knew others would follow the formula. For me music is a way of life, not a fashion. Originality of sound was always important to me. It's something you have to have, no matter what you do."

Remo disapproves of the trend of plagiarism in music. "In India copying is a way of life whereas in the West originality is almost mandatory in music. How many re-mixes do we hear in the West? Lately there's the complaint that the new Indian sound is too westernized. I hope the rap, pop and rock that we've lately discovered would eventually include some Indian masala as well. But it's great that India is finally warming up to Western sounds. Can you imagine, until the film Rock On, Indian masses were not aware of rock music which is the most popular genre in the West. And until Barfi no one here knew of the existence of Latin American music."

Remo agrees Bollywood determines musical tastes in India. "Of course! If the music is not in a film it doesn't even exist. I admit my music did make a mark outside Bollywood. But that was at a certain time when pop music was in its gestation period in India. Thereafter pop musicians sold out to Bollywood. Record companies were just not interested non-film music. Bollywood completely swamped pop music. Unfortunately, musicians were happy to be gobbled up in Bollywood."