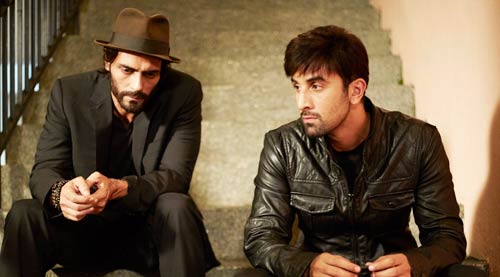 Valentine's Day is pretty much considered as an epitome of everything that is love. Hence, the same is expected when it comes to films releasing in theatres as well. Surprisingly though, in last 10 years, there has been just one quintessential romantic Bollywood release - Ek Main Aur Ek Tu. Otherwise, there has been everything from a social to historic to action affair hitting the screens.

With a musical Roy arriving on screens this Valentine's Day, all eyes are on how the Ranbir Kapoor-Arjun Rampal-Jacqueline Fernandez film would score in theaters. Since Ranveer Singh-Priyanka Chopra-Arjun Kapoor's Gunday holds the record for being the biggest Valentine's Day success in last 10 years, it is going to be an interesting battle for sure.

Let us give a lowdown.

As is expected from a film which has the name T-Series attached to it, the soundtrack of Roy has turned out to be a hit. In fact, a big hit. Now that has given further impetus to this dramatic affair which has Ranbir Kapoor returning on the big screen after more than 15 months. With Arjun Rampal and Jacqueline Fernandez coming together to give the film an interesting combination, Roy is all set to open very well.

By no means was Gunday a Valentine's special release. Right from the title to the texture to bromance to backdrop, everything about Gunday screamed - 'Don't expect any mushy romance here'. Still, when Yash Raj announced film's arrival on this day, no other filmmaker dared to come alongside. Result? A solo release and a solid box office opening which helped the Ranveer-Priyanka-Arjun film turn into a success.

'This Valentine...Love Will Be Murdered', proclaimed Murder 3. Well, audience wasn't too accommodating either and the outcome was a lukewarm reception for this Bhatt outing that folded up under the 25 crore mark. Another release, Vivek Oberoi and Neha Sharma's Jayantabhai Li Luv Story, was set as a romantic but turned out to be a box office disaster with just 3 crore coming in.

Karan Johar was sure that his romantic musical had to arrive around Valentine's Day. Everything was planned and put well in place for this Kareena Kapoor and Imran Khan starrer. The songs were popular and the release was good too. Outcome was some good box office collections to the tune of 40 crore, which took the film way past the safety mark. A rare romantic release which was apt for the love season.

One wouldn't have imagined a family drama with cricket as a backdrop for arrival on Valentine's Day. However this is what happened for Akshay Kumar-Rishi Kapoor-Anushka Sharma starrer Patiala House that had a lukewarm box office reception of around 30 crore. Other two releases were huge disasters though as Aashiqui.in and Angel, both romantic films otherwise, folded up under 1 crore mark each.

Till the arrival of Gunday, record of biggest Valentine's success ever was held by My Name Is Khan. Ironically, this was again not a quintessential Valentine's Day release as it basically was a statement on the socio-political affair in the U.S. of A. Nevertheless, for audience, just the presence of Shahrukh Khan and Kajol in a Karan Johar film was a reason good enough to check it out in the Valentine's season.

Shahrukh Khan wasn't new to bringing his films around Valentine's Day. He had done that earlier with Billu. Though he had an extended guest appearance in the film, his three item numbers with Deepika Padukone, Kareena Kapoor and Priyanka Chopra brought good spunk in the affairs. The film was a barely coverage affair. Other release, psychological drama he Stoneman Murders, was a complete disaster.

Thankfully, it hasn't been as barren an outing for love at the box office as it seems to be. Back then in 2008, Hrithik Roshan and Aishwarya Rai Bachchan did enjoy a few 'Jashne-e-bahaara' moments on screen, even as there were fights, betrayals and treachery around them in this historical affair. The film was a success with close to 60 crore coming in, though Kunal Khemu's Superstar couldn't manage even 3 crore.

At the very onset, even Eklavya: The Royal Guard had seemed like a period affair. However that wasn't really the case as the Amitabh Bachchan, Sanjay Dutt, Saif Ali Khan and Vidya Balan starrer actually told a contemporary tale, albeit with 'havelis', 'raja sahebs' and 'begums' all around them. The film was a very mild success with Vidhu Vinod Chopra managing to bring in just 20 crore as a producer.

At the very onset, Fight Club (Riteish Deshmukh, Suniel Shetty and Zayed Khan) had sounded pretty enticing. The promos had done the trick too and there was some good curiosity around the film's release, despite absolutely nothing in it for Valentine's Day revelry. After a fair start, the film folded up around the 6 crore mark. Sushmita Sen and Mithun Chakraborty gave a much bigger disaster though with 'Chingaari'.

Though women played central roles in each of the four releases of the week, there was nothing in there that would have made lovey-dovey couples lining up to catch these in theatres. Audience passed the same verdict as well with the film folding up around the 5 crore mark. Neha Dhupia's Sheesha, Bipasha Basu's Chehraa and Manisha Koirala's Chaahat-Ek Nasha couldn't manage even that and were disasters.