Bollywood celebrities, over the years, have taken keen interest in sports. The actors, especially, take some time off of their busy schedule to play their favourite sports. Not just that, some of them are owners of different sports teams as well. Ranbir Kapoor and Abhishek Bachchan are some of the celebrities who are team owners of Football teams. Arjun Kapoor is also the face of one of the teams. They often play charity matches for different foundations. Just this past weekend, they were in Singapore for the same. 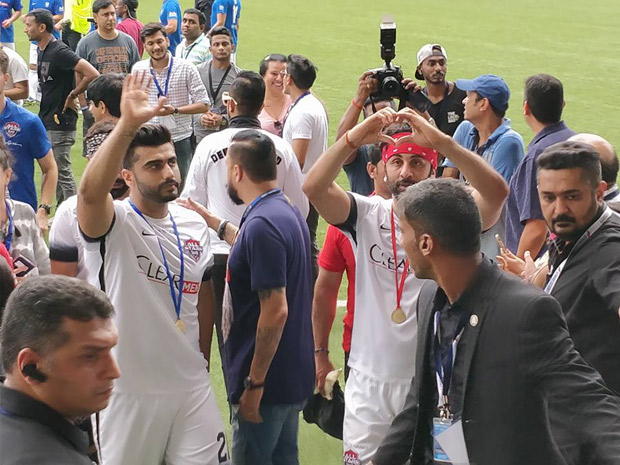 It was a starry affair at the All Stars Football match in Singapore on Sunday. Before the match, there was a gala dinner where actors Ranbir Kapoor, Abhishek Bachchan, Arjun Kapoor and many others looked dapper in their tuxes. They all assembled for Magic Bus gala dinner where they spoke about their upcoming match against Singapore’s Celebrity Sports Club. 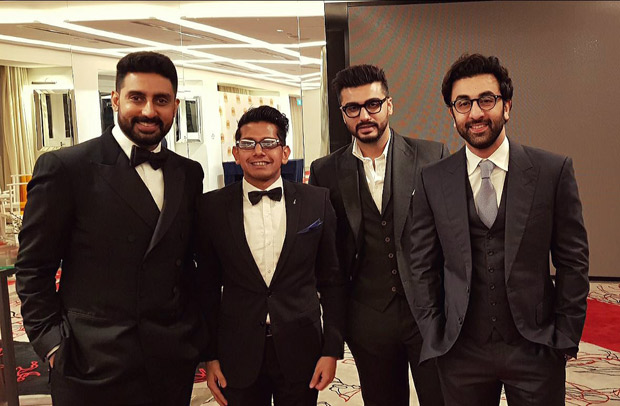 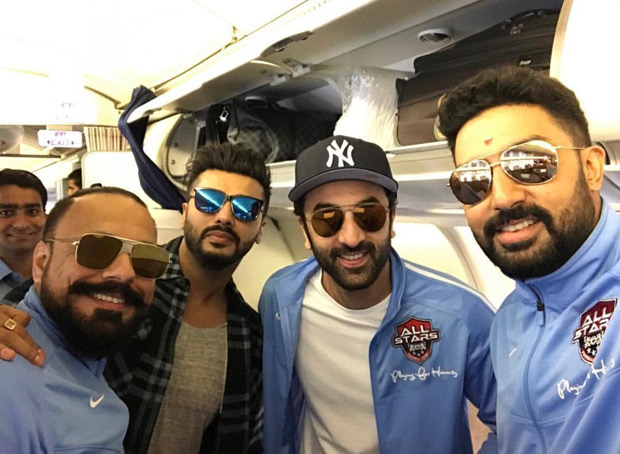 On the match day, tennis player Leander Paes shared a couple of pictures with Ranbir Kapoor, Abhishek Bachchan, Arjun Kapoor and Kartik Aaryan. Sporting their jerseys, he captioned the images, "Looking forward to a great game of football with this bunch! Blessed to Play for Humanity and make a difference to children around the world with @AllstarsFC_PFH @bunty_walia #Singapore #MagicBusCup." 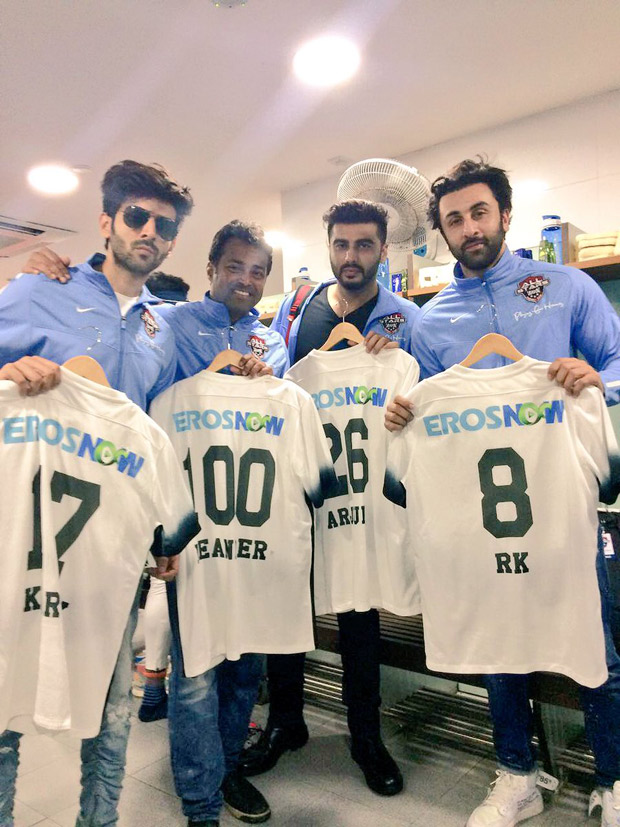 During the match, all of the celebs were dressed in white uniforms with different colour bandanas. Making the match more interesting, Ranbir Kapoor joined Abhishek Bachchan in impromptu dance session. Ranbir's former girlfriend Katrina Kaif's song 'Kala Chashma' was being played when Abhishek began 'Kajra Re' signature step. Then, Ranbir followed the same hook step as the audience cheered for them. They eventually won the friendly match. Arjun Kapoor was seen waving at the fans and giving them flying kisses. 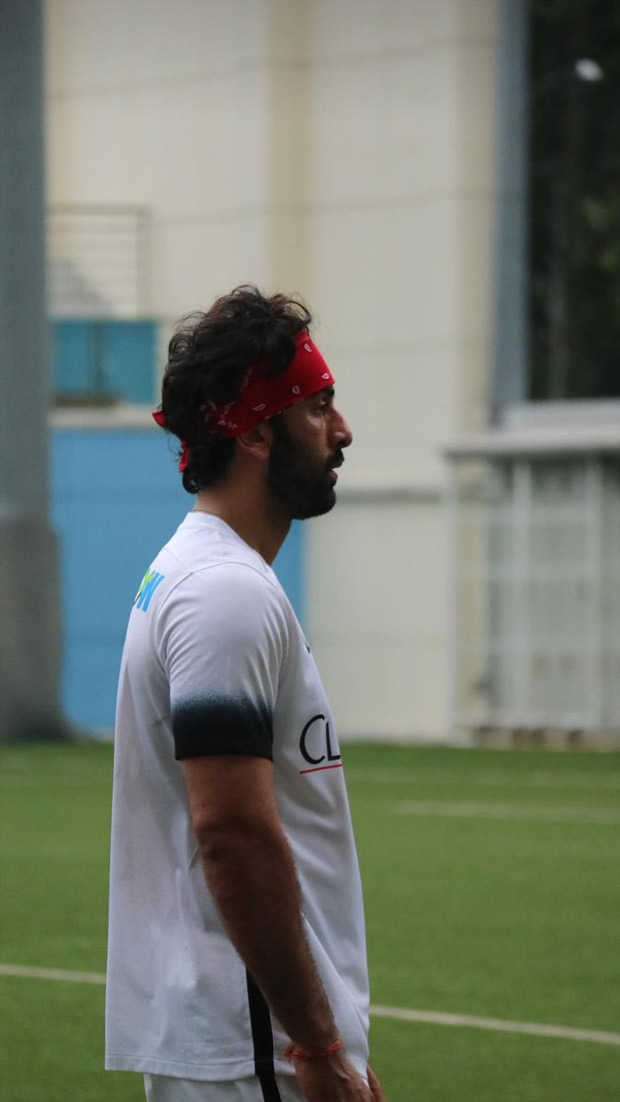 On the work front, Ranbir Kapoor is looking forward to the teaser release of Sanjay Dutt's upcoming biopic which is releasing in April 24. Directed by Rajkumar Hirani, the film is slated to release on June 29, 2018. 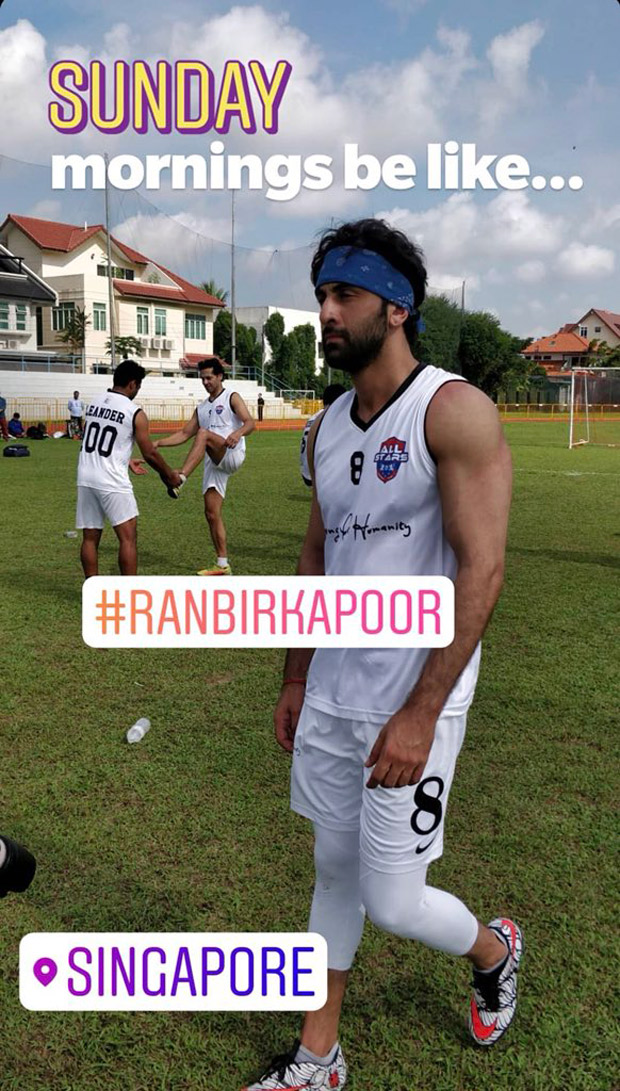 Arjun Kapoor, six years after their first film together, is returning with Ishaqzaade co-star Parineeti Chopra in Namaste England. The film has been preponed and will now release during Dussehra 2018. 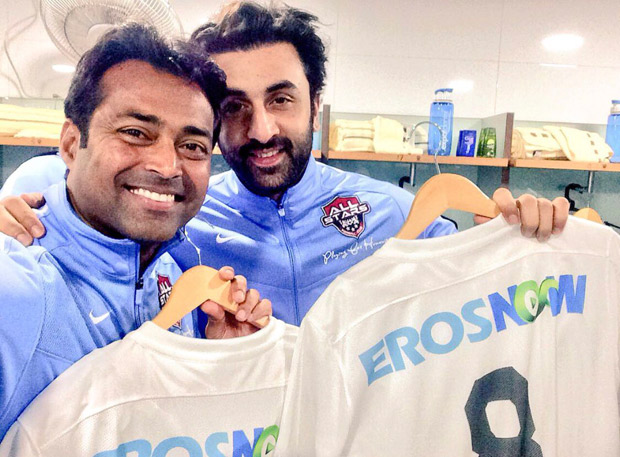 After the win, Abhishek Bachchan shared a group picture with a caption that read, "I want to thank each and every one of these boys. They take out their valuable time every weekend to come and practice, and also to travel as a team without the many perks that they rightly deserve, to play for @magic.bus. Thanks to their help and contribution we managed to raise around 800 thousand dollars for the wonderful work that Magic Bus does. I will eternally be thankful to all of them for their selflessness, charity, grit, dedication, respect and love. #brothersforlife #winners @allstarsfc_pfh @gsworldwideent." 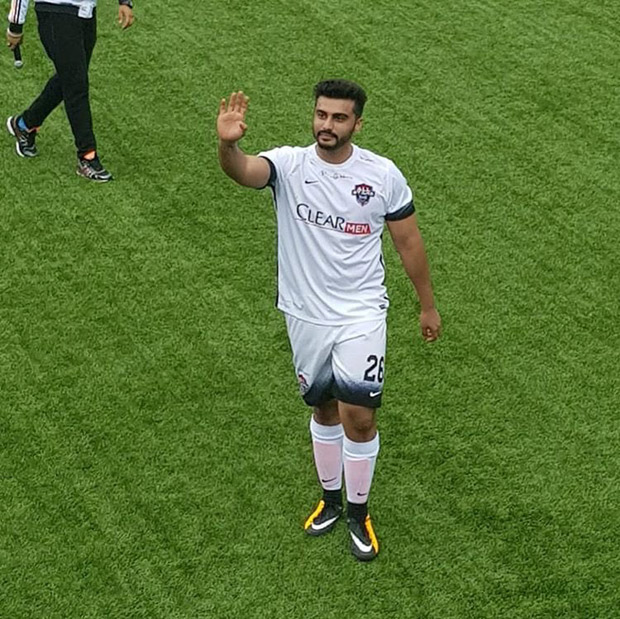 Ranbir Kapoor and Team ASFC at the #MagicBusCup charity dinner in Singapore pic.twitter.com/0G2u4m6Afe

Ranbir and Team ASFC on stage at the charity dinner. #MagicBusCup pic.twitter.com/qDc6OUoZCc