Priyanka Chopra suffered an injury while filming Citadel. She had posted a photo earlier in the day in which she posed with a bleeding face and asked Fans, "What's real and what's not?" She had an abrasion on her brow. 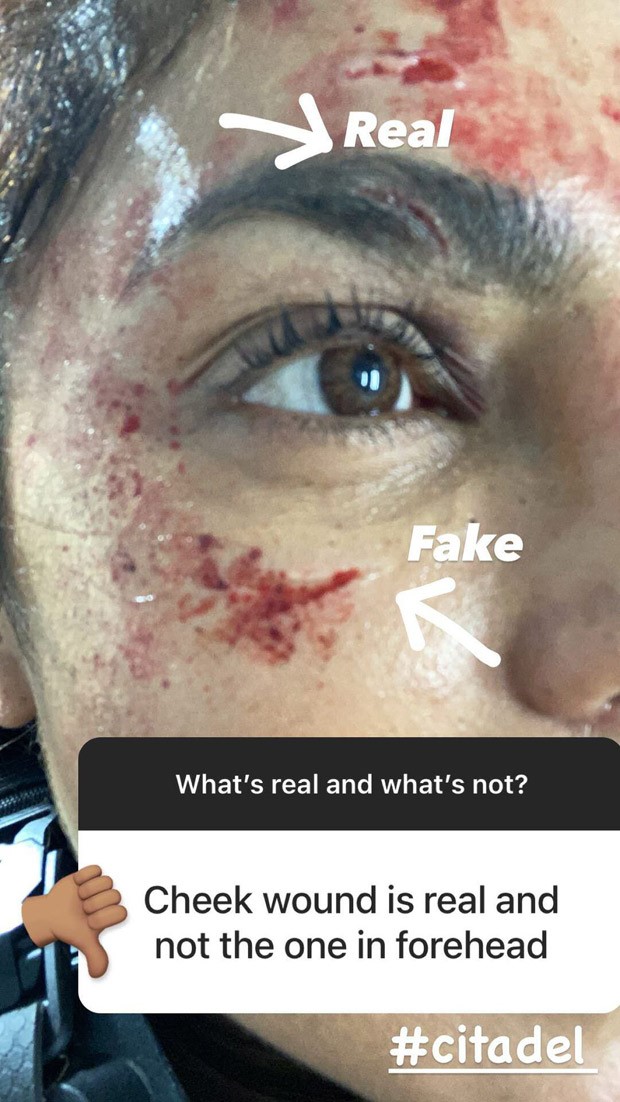 Priyanka Chopra injured on the sets of Citadel, shares photos of her injuries

She uploaded a fan's response a few hours later, who thought the wound on her face was not real but the cut on her forehead was. Priyanka gave thumbs down to the remark and confirmed that the bruise on her brow is real. The actor enlarged the wound, indicating that she was slashed in the centre of her right brow.

Priyanka has been busy filming the series recently. Pictures of the actress on set recently went viral, and she was seen filming a difficult scene. She wore a pistol harness around her torso and was dressed in black and khaki.

Priyanka was filming a scene with Pedro Leandro, who was holding a gun at her in one of the photos. She was caught drinking water and conversing with her fellow castmates in between sequences.

Priyanka Chopra plays a spy in the film Citadel. Richard Madden, a Game of Thrones veteran and star of Eternals, co-stars with the actor. The series will air on Amazon Prime Video, and it will be her first web series. The executive producers are the Russo Brothers, who are known for their work on Avengers: Endgame.

Since early this year, Priyanka has been shooting for Citadel in London, where she has been stationed for months. She finished her international film Text For You just before Citadel.

Aside from these two, she is working on a variety of other projects. The Matrix 4, named The Matrix: Resurrections, featuring Keanu Reeves, a romantic comedy starring Mindy Kaling, a wedding-themed reality programme, and a Ma Anand Sheela biography are among them. She'll also be seen in Jee Le Zaraa, with Alia Bhatt and Katrina Kaif, in her Bollywood comeback.