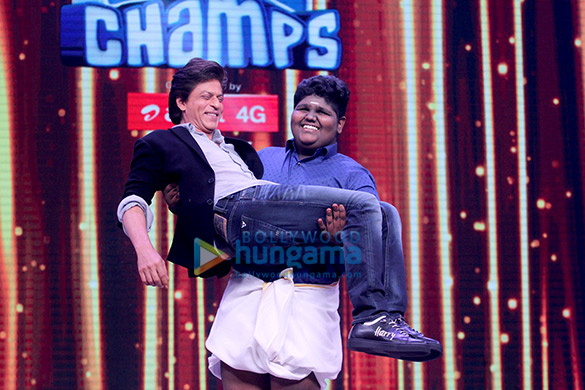 We all know that Shah Rukh Khan dives deep into promotions before the release of his films and a part of it involves visiting several TV shows. The superstar recently appeared on the singing reality show for kids Sa Re Ga Ma Pa Li’l Champs on Zee network for the promotions of his forthcoming film Jab Harry Met Sejal. The actor, whilst having gala time during performances, was in for some fun moment when one of the kids managed to pick him up.

One of the contestants from Sa Re Ga Ma Pa Li’l Champs, Yumna Ajin decided to do something special on the arrival episode of Shah Rukh Khan. Whilst he sang ‘Jiya Re’ from Jab Tak Hai Jaan during the show, the participant who hails from Kerala also interacted with their special guest. But that was not the end! Yumna went on to pick up Shah Rukh Khan during the shoot of the episode. On the other hand, while the actor was sporting enough for doing this, he was all praises for Ajin’s talent.

Talking about how the show inspires him to work, Shah Rukh Khan expressed how pleased he is to see such talent from the nation and termed Yumna’s performance as ‘amazing’ along with adding that it had left him speechless. Further, the actor also stated that he is so inspired by the show, that now he wants to keep working for another 100 years.

As for his film itself, Jab Harry Met Sejal is directed by Imtiaz Ali and it stars Anushka Sharma as the leading lady. The film traces the journey of a guide who helps a Gujarati girl whilst on her trip to find her lost engagement ring. The film hits the silver screen on August 4.