We all know that Aamir Khan and Kiran Rao have always been active when it comes to philanthropic work. The two of them are currently busy working towards the development of Paani Foundation which aims at solving water scarcity problems in villages across Maharashtra. For the same, despite the rising temperatures, the couple has taken off on a trip to these villages in the state to spread awareness and help the regions with their famine issues. During the same, Aamir shared a series of pictures from their trip to one of the villages and the photos definitely left his fans impressed with his humble attitude. 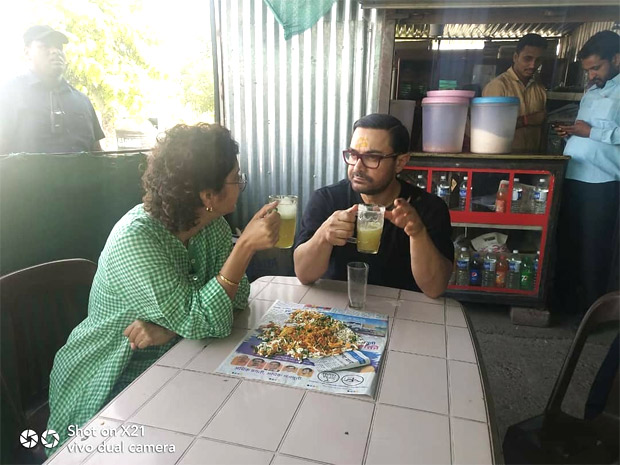 Aamir Khan and Kiran Rao were seen enjoying a glass of sugarcane juice and street food at one of the street side restaurants in Zhawadarjun village, according to the post shared by the actor. He also posted another set of pictures of them interacting with the locals and also clicking photos with them. Here’s a look at the post shared by the actor:

On the film front, after the dud Thugs Of Hindostan, Aamir Khan has decided to move on to his next project that has created immense anticipation already. He announced on his birthday that he has bought the rights of the popular Tom Hanks Hollywood film Forrest Gump and will be making an Indian adaptation of the story - Lal Singh Chaddha. The cast and rest of the details of the film are yet to be revealed. It is expected to go on floor later this year and the actor has already started his prep for the same.

Also Read: Aamir Khan posts a ‘sweet’ thank you note to Madhuri Dixit after she appears as a guest in his Marathi show Toofan Aalaya