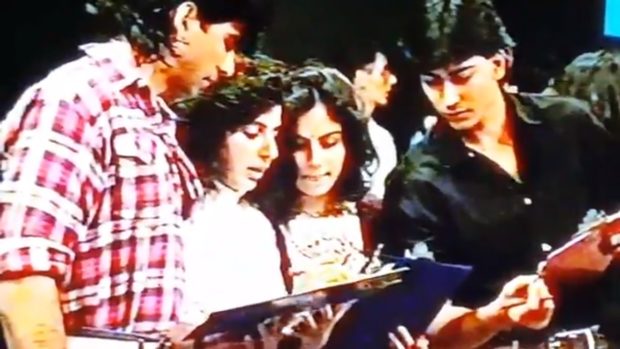 Akshay Kumar has turned 50 today. On this glorious occasion, Sajid Khan, who has directed the actor thrice and who’s been an old friend, posted some wonderful things about Akshay. Initially, he uploded a slightly old picture of the two and wrote a lovely message about the superstar and even lovingly calling him Sundi, that is Akshay’s nickname and also the name of his character’s alter ego in last year’s comic caper Housefull 3.

Later, Sajid Khan posted a video on his Twitter timeline that is bound to make Akshay Kumar fans happy. It features Akshay as a judge for an event held in Bhaidas College, Mumbai where Sajid Khan studied. Sajid claimed that this was his stage debut as a judge. In the 63 second long video, Akshay Kumar can be seen on the stage, wearing tight jeans and checkered shirt. He is sporting long hair and is seen exchanging notes with fellow judges.

Akshay Kumar featured with Sajid Khan in the latter’s debut film Heyy Babyy in 2007. He also worked in Sajid’s next two films – Housefull in 2010 and Housefull 2 in 2012. All the three films were huge hits. However, Sajid Khan lost out to directing Akshay Kumar in Housefull 3. It remains to be seen if both would collaborate once again in Housefull 4.