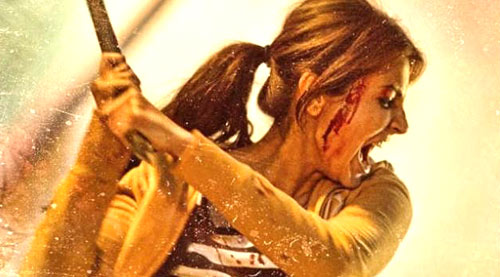 It is a known fact that a good part of NH10 has been shot in Gurgaon and whereabouts due to the nature of the plot and the narrative. However, it wasn't really a happy start for director Navdeep Singh and his cast and crew when there was trouble galore from the locals right at the beginning of the shoot.


Informs a senior crew members, "This was during the early days and we had just started shooting for the film. Navdeep really likes real locations, as he had demonstrated in his debut film Manorama-Six Feet Under as well. He chose a strategically placed 'dhabha' for the shoot. Just minutes into it and suddenly a crowd started emerging. Within half an hour, the whole situation changed as there were close to five thousand guys who had gathered out of nowhere."


At the beginning it seemed like a harmless attention seeking tactic as many local youngsters started showing stunts on cars and bikes. However, the situation started becoming scary when some of them started firing in the air.


"When we resisted, they started breaking glasses of our car," the crew member adds, "The entire unit got so scared of them. We were pretty shaken up and this is when Navdeep gathered courage and asked them that why they were disrupting the shoot. They said that they were pretty excited as they hardly see anyone shooting in Haryana. Navdeep was distraught. He just gently reprimanded them that it was because of this very reason that why people would continue to be wary of shooting amongst them."


Though a few youngsters did get the point and made way for the film's shooting to resume, it was becoming increasingly tough to drive home this point amidst a 5000 people strong mob. Disappointed, the team decided to just abort the shoot and can this scene at a different location.


When contacted, Darshan Kumaar, who plays the antagonist in the film (and was last seen as Priyanka Chopra's empathetic husband in Mary Kom), confirmed, "Yes, this was meant to be my introduction scene but unfortunately we had to stop shooting. Later, we shot this scene at Jodhpur. I know that people love Bollywood, they love us, they are crazy about us. But that day, it was scary as hell."


Not that Navdeep dropped his plans to shoot in Gurgaon. After a few days, he returned to Sohna, which is in the interiors of Gurgaon, and shot a few scenes rather discretely. This time, thankfully, there was no crowd trouble.