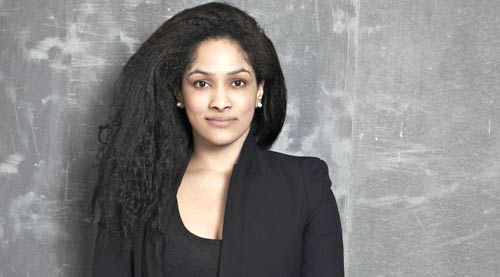 On the eve of her wedding to producer Madhu Mantena, designer Masaba Gupta speaks her heart out to Subhash K Jha on matters of the heart.

Why the second wedding ceremony on November 21?

Because we couldn't involve all our friends in the first ceremony. A marriage is the biggest happening in one's life. It's important to celebrate it with everyone. More importantly I wanted to

celebrate my marriage in a traditional way. All the rituals fascinate me. When I look back I don't want my marriage photographs to show the two of us just signing papers. We decided to have a

second ceremony so we could invite all of my friends, Madhu's friends and my mother's friends. This is especially for my mother who hardly socializes and has never had the chance to invite her

friends to something of her own.

So the encore marriage is more for your mother than you?

I think it's for both of us. I want to do this because I want to dress up in all the bridal finery. I didn't want to miss out on that feeling of looking like a bride.

Are you wearing clothes designed by yourself?

For the smaller functions, yes. For the larger functions I am wearing other designers because I don't wear heavily embroidered clothes.

What attracted you to Madhu?

The ability to switch himself off from this high-maintenance film industry. What was really nice about Madhu is that he was part of the film industry and yet different. I've this perception of the

industry and its people because I've grown up within the industry. There is a certain pre-conceived notion about producers that I grew up with. Madhu is not like that. For him making a film is not

a matter of life and death. He's very practical in his approach and to the business of cinema. He's very professional. He has multiple business interests that keep him detached from production.

I've seen him in crisis situations as a producer. But the minute he sorts it out he moves on.

One has never seen you being friends with the film fraternity?

Oh, I do have friends in the film fraternity, like Prateik and others who were in a relationship. So I was not linked to them. I've grown up with Sonam Kapoor and Alia Bhatt. But I also have a

circle of friends which is not part of the film industry. I think that's very important. Also, I was sent to a school where we had both celebrity kids including star-kids, and working class kids. I

got to see so many kinds of lives in school.

Your mother (Neena Gupta) had to be both the parents to you while you were growing up. Was that tough on you?

It was tough on her. But I never saw her break down or become weak in any way. She kept working and looking after me. She managed her serials, home, me, the maid and everything else. I don't know

how she did it.

Neena is a terrific actress?

I keep telling her to do more work. But where are the roles? She can never ask for work. She never has. This is her biggest strength as well as her weakness. Also television serials during her

How was your life influenced when you got to know that you were a love child and that your father was Sir Vivian Richards?

I don't think at any point of time was anything hidden from me...thankfully! To hear about one's life from other kids at that age can be traumatic. Children can be very mean. I was told I was born

What did it mean to a child?

I didn't understand the term back then. Now when I do I wonder what the big deal was. I still don't know what it means. I've seen parents of friends breaking up because of an extra-marital

relationship. I think I was comparatively in a more well-adjusted home. But just because my parents were celebrities my parentage was blown out of proportion. They decided to pull my parents down.

My birth certificate was published.

Journalism at its lowest ebb?

Can you imagine? It was such a cowardly thing to do. The journalist who decided to publish this...what kind of a life did he have? Was he even loyal to his family? You can't sensationalize people's

lives. It was my mother's prerogative how and when she wanted to announce me.

I look ONLY like him except maybe my eyes. I even walk like him, and we both have a sinus problem. So I'd say I'm 80 percent like my father.

Girls who look like their fathers are considered lucky.

Really? I hope it's true.

Do you crave to see your father more often?

Not really. I am not the kind of person who craves for anything or anybody. I love being on my own. Besides I never had a chance to bond with him during my childhood. I speak to him constantly. And

that's enough for me. He isn't the kind of guy who goes out much. I've made peace with the fact that he likes being home in Antigua with his phone switched off. I respect his privacy.

Do you visit your father in Antigua?

When I am in Europe or America I make sure I make a trip to see my father.

Has Madhu met your father?

Yes, they met a month back. They bonded on Bob Marley's music. My Dad likes Madhu. Getting my father's approval for anyone is not easy, let alone someone his daughter has chosen to spend her life

with. My Dad has a soft corner for South Indians.

Do you enjoy cricket?

Very much! I was heartbroken was Shewag retired. He's one of my favourite cricketers.

Is your father coming for this wedding?

Yes, he is coming for the wedding. I am the first of his children getting married. So he doesn't want to miss it.

When will you start a family?

Not immediately. I want to expand my clothes business first. Besides, I already have a baby to take care of.

No, no my business. Madhu likes being taken care of. But he is not a baby. He has looked after himself all these years. He loved setting up a home with me, coming home to a meal.

I don't cook well. But I am good at getting meals organized. I try to get his favourite dishes made. My husband is a big foodie. If he starts on sweetened rice he can't stop.