The Adivi Sesh starrer Major, an action entertainer based on the life of 26/11 martyr Major Sandeep Unnikrishnan was released last week. After much hype and promotions, the film opened to an encouraging start at the global box office. In fact, the film, which collected Rs. 13.4 cr on its opening day at the global box office, saw immense growth on its first Saturday and Sunday running. 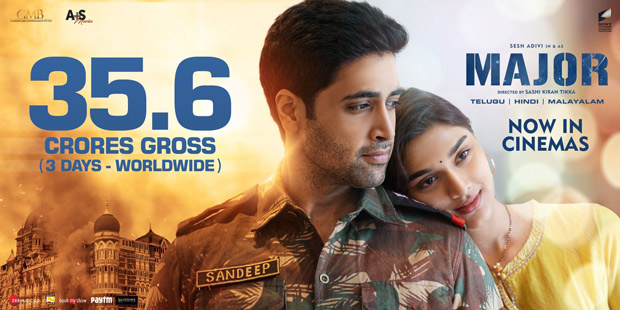 As per reports, Major has proved to be unstoppable and the amazing response from the audience is helping the film grow everyday not only in India but also globally. In fact, the film has now raked in a staggering Rs. 35.65 cr at the global box office collection over its opening weekend alone. On Day 3, Major managed to collect Rs. 2.05 cr nett within Indian from the Hindi market, which is a hundred percent jump from day 1 box office collection.

Going forward, Major is expected to have a strong week with continuous support from multiplexes and screens all across the country.