The much-anticipated trailer of Salman Khan Film's Loveratri released introducing Aayush Sharma as the Garba boy and Warina Hussain as his love interest. Immersing the audience in the festive mood and with the fresh chemistry of Aayush and Warina, the trailer captivates the interest of the audience with the foot tapping music. 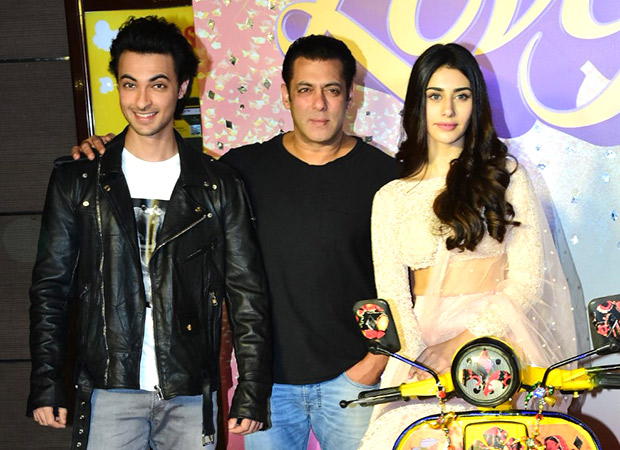 Set against the backdrop of Gujarat, the romantic drama unfolds the love story of the leading couple over bonding over Garba. Giving a sneak peek into the colourful festival of Navratri, the poster featured the crackling chemistry of the fresh air. Proving to be a festive treat, Loveratri captures the essence of Navratri with Garba being the crux of the film.

Talking about the film and how the role went to Aayush Sharma, Salman Khan revealed that there was a backstory to this. At the trailer launch of Loveratri, Salman revealed, "There's a backstory. Sohail and me, we were supposed to do a film My Punjabi Nikaah. So that script we had, a ready script. Suddenly, I started doing different kind of roles. So, that role did not suit me anymore. Sohail was working out in the Gold's gym and he saw this one boy and said 'Salman Bhai, there is this one boy I saw in the gym and he is the ideal casting for My Punjabi Nikaah. So, I asked did you speak to him. He said no and I only saw him once and after that, he has not been coming to the gym. He said very fit guy, hardworking, doesn't talk to anyone, and keeps to himself, very respectful. I said good. Then again, we got an opportunity to meet Aayush at home after 6 months. All the brothers and Alvira were called by Arpita and she said this is the guy I want to get married to. So, we were like 'where did this guy come from, suddenly?' Sohail was the last one to enter the house and was startled. I asked 'What happened?' He said, 'Remember the guy I told you about in Gold's gym? He is the guy. I said 'Chalo, picture free karega yeh!'"

Speaking about producing a film like Loveratri, Salman added, “This film has nice love story of a local boy and an NRI girl in a festive backdrop."

Elaborating on how Aayush Sharma said no several scripts before saying yes to Loveratri, he added, "When Abhiraj (Minawala) and Aayush (Sharma) heard the story, they agreed to do the film. Before that, I was getting kind of pissed off with him (Sharma) because I sent him about 9-10 scripts but he didn't like those. After hearing this (Loveratri) script, he told me that I see myself playing this character, while I didn't see myself playing those characters... So, that's how we moved ahead with this film."

Salman Khan further talked about it is difficult to launch newcomers these days compared to the times when he was launched. “Yeah...it's a big challenge and the challenge is not to launch that person but it lies in what he or she will do to survive in the industry. In the times of Mr Bachchan (Amitabh Bachchan), they could survive lots of flops and today after one or two flops, it's like over for you. I think Bachchan Sa'ab got his first hit in the form of Zanjeer when his 12-13 films had flopped at box-office. So, launching is okay because you believe in the script and the actor. Now, I feel younger generation is really talented. They act really well, they have amazing bodies, they look good and they do dance and action phenomenally. So you know that these guys are going to make it. But, god forbid, if the film does not do well, then you need to stand by them and support them,” he said. 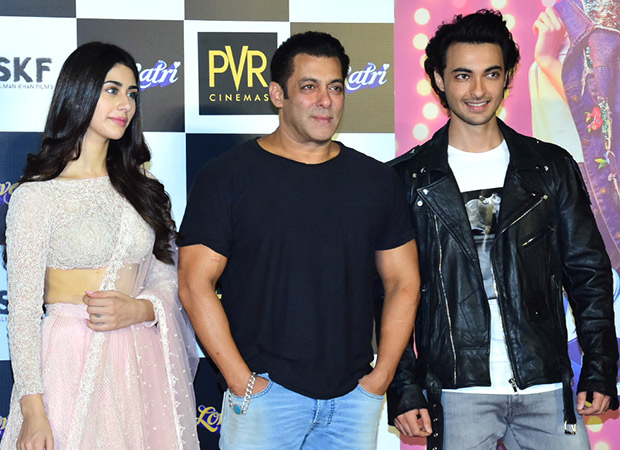 "Today, launching (a person) is okay because you believe in your script, you believe in your actor and you know, the boys now, the younger generation are really talented. They act really well, they all train. Amazing bodies, really good looking and dancers - they do action phenomenally. So you can tell that these guys are gonna make it. But after that, if their film does not do well then you need to stand by them and stick by them. So that is what one of the things is right now. If something went a little wrong even though the film was good, there is social media, there are some people who enjoy trolling and putting somebody down because perhaps they were eying for the role or you want to be something. So you just forget about the film and partially start breaking that person down. Once that starts, then it just goes on and on and on," Salman added.

Aayush Sharma, who was nervous about the trailer launch, said, “When I heard the narration from Abhiraj, this character was so honest that this is the film that will entertain everybody. Throughout the narration, I had a big smile on my face. Because of this film, the audience will walk out of the theatre with a little bit of entertainment.”

Talking about his camaraderie with Warina Hussain, he added, “We had four to five months before the film. So, during our workshops, we became good friends which really helped us perform these characters. Also, because it is my first film and her first film, we both used to share our nervousness.”

Then, a media person asked as the film is about love, what is his dream love like? Salman, in his witty way, quipped, “See, the problem with dream love is, she comes in my dream but when I wake up next morning, I don’t remember the dream only. It’s my dream love. Why should I share it with you?”

Written by Niren Bhatt, Loveratri is directed by Abhiraj Minawala who will also be making his directorial debut with the film. It is produced by Salman Khan under the banner of Salman Khan Films and is slated to release on October 5, 2018.

Also Read: Salman Khan finally opens up about Priyanka Chopra WALKING OUT of Bharat and he doesn’t seem happy about it

Neha Dhupia makes a statement in a tie-dye…