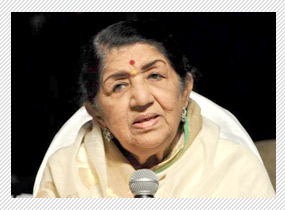 On her 84th birthday, Lata Mangeshkar speaks for the first time on the people who influenced her life...


My father Pandit Dinanath Mangeshkar: "My father was a huge influence in shaping me into the singer that I became. He taught me music. Do you know for a very long time my father didn't know I could sing. I was scared to sing in front of him. Our domestic helpers were forced to hear me sing. I'd go into the kitchen and make them hear me sing. I'd sing K. L. Saigal's and my father's songs to them. My mother would scold me and shoo me away berating me for wasting her time. Then something happened. A student of my father (who later became the very well-known Maharashtrian actor Chandrakant Gokhale), who was our tenant, was doing riyaaz while my father had stepped out. I was playing outside when I heard him sing a bandish. I was around 5 years old. I went inside and told him he was doing it wrong, and I sang it the way I had heard my father sing. My father came back and made me sing it again. I sang and fled. I'd learnt from hearing my father sing, though I never had the courage to go and sing with him. But that day after I corrected his student, things changed. The next morning, he told me to wake up, wash up and come to his room. I trembled as I got ready. I was petrified of him. He was very conservative and a disciplinarian. All the ladies of the house, young or old, had to sport kum-kum on the forehead and bangles in their hands. We were not allowed to use powder. Those were the days of freedom fighting. Our home was filled with talk of anti-colonialism. Veer Savarkar was my father's friend. My father had written a play and the songs for the play for Veer Savarkar. Anyway, that day when he asked me to come to learn music from him, I came and sat in front me. He told me to take out the 'tanpura' and showed me how to hold it. He asked me to sing in the same raga that he heard me sing the day before to correct his pupil. That's how I was initiated into formal singing. He taught me music regularly from that day onwards, though he never had a formal group of students to teach. My elder sister Meena and I learnt music from our father. The other siblings were too young when he died. My brother Hridaynath was only 4 when my father passed away. My father didn't see me become a playback singer. But he had predicted my success. He was a very good astrologer. He had prophesied to my mother, 'Lata would become so successful that no one would be able to reach where she was.' He also predicted that he'd not be alive when I became famous and that I'd look after the entire household. I used to accompany my father during his stage singing. After his death, I learnt music from others. But I consider my father my true guru. I don't think I'd have become a playback singer if my father had lived. He wouldn't have allowed it."


K. L. Saigal: "I never met him. I only saw him in his films. When I arrived in Mumbai in 1945, Saigal saab left the city. But I idolized him from my childhood. After my father, my greatest influence was Saigal saab in music. I'd sing all his songs. Our family lived in a small town called Sangli. We'd even see his films in the nearby theatre. My father also liked Saigal saab's music and films. But although I started singing for films, our family had nothing to do with film folks. Saigal saab passed away in 1947. It is one of my life's biggest regrets that I never met him."

Master Ghulam Haider: "There are many versions and stories of who discovered me and who was instrumental in giving me my first big break. Let me tell you the true story. When I came to Mumbai, I worked for Master Vinayak. My sister Meena and I stayed with Master Vinayak's father while the rest of my family lived in my mother's parents' home. In 1946, I told Master Vinayak that I needed to live with my family. That's when we all started living in one home. In 1947, Master Vinayak passed away. Ten days after his death, a photographer who worked in his company, took me to a music director Harishchandra Vade. He heard me sing and recorded two songs in my voice for a film called Love Is Blind. That film got shelved. However, a junior-artiste supplier, a Pathan, heard me sing. He recommended me to Master Ghulam Haider who had just come from Pakistan. I really respected him for his music in Khazanchi, Shahid, Khandaan etc. I went to meet him. This was 1947 and I was merely 18. I remember he was recording. He kept me waiting till evening. My cousin sister was with me. He finally called me to sing at around 5 pm. When I went in, he was playing the piano. I got frightened when I saw him. I wondered what a music composer who had worked with Noorjehan would think of me. He asked me to sing. I sang one of his songs from the film Humayun. Then he said to sing one more song. I sang a Noorjehan number. Then he wanted to record my voice. During those days, songs were recorded on film. There was no tape. He asked me who my guru was. When I told him it was Amanat Ali Khan Saab, he said they were friends. Then, Master Ghulam Hyder played my voice to the very successful producer Shashadhar Mukherjee who said, 'Yeh awaaz nahin chalegi, yeh awaaz bahot patli hai' (this voice won't work, it's too tinny). Shashadharji needed a playback voice for actress Kamini Kaushal. And he felt my voice didn't match hers. Master Ghulam Hyder was livid. He ordered me to accompany him to the Bombay Talkies studio in Malad where Majboor was being shot. He was the music composer. He didn't say anything to me. He just made me rehearse a song. Later, when we recorded, he said, 'People will forget everyone including Noorjehan when they hear you.' The first song he recorded with me was a duet with Mukesh Bhaiyya called 'Angrezi Chora Chala Gaya'. This was my first major break. I recorded 3-4 songs for Majboor. Composer Khemchand Prakash heard them and signed me for Ziddi. For this film, I sang a duet with Kishore Kumar. Then composer Anil Biswas heard me. That's how my musical journey began. The credit for giving me my first major break goes to Master Ghulam Haider. Incidentally, Shashadhar Mukherjee later admitted to me he was wrong about my voice and crazy to have rejected my voice. I sang for many of his films including Anarkali and Nagin.


Madan Mohan: "We sang a duet 'Pinjre mein bulbul bulbul bole' together in Shahid for Master Ghulam Haider. That song about a brother and sister singing together, never got released. One day, suddenly he came up to me and said, 'Tum raakhee baandhne nahin aayee mujhe?' From that day, he was my Madan Bhaiyya. I was close not only to him but to his entire family. I am still very close to Madan Bhaiyya's son Sanjeev Kohli."


Chitragupta: "I was very very close to Chitragupta. We were constantly in and out of one another's homes. Interestingly, Madan Bhaiyya used to live in a bungalow in Khar (Mumbai). I spent many evenings there with him and his family. When he moved out of that bungalow, Chitraguptaji moved into the same bungalow. Mehboob Studios was very close to this bungalow. So right after recording at Mehboob, I'd rush to spend time at that bungalow first to meet Madan Bhaiyya and then Chitragputaji. I used to meet Chitragupta almost every day, not only in Mumbai but also in other cities like Chennai and Bangalore. We were one big group of friends Chitraguptaji, Dilip Dholakia, my sister Usha. I'd have a meal regularly at his home. Bhabhi (Chitragupta's wife) made wonderful Bihari food. They would also come home regularly."

Pandit Narendra Sharma: "I used to call him 'Papa'. The first time, I met Papa (Pandit Narendra Sharma) it was at Master Vinayak's residence. He was accompanied by the eminent litterateur Amritlal Nagar. He asked me to sing for for him. During those days, I didn't need a second invitation to sing. I'd burst into a song whenever I was asked. He was a learned man. I'd spend hours listening to him. In 1968, when I recorded the Bhagavat Gita, Papa came home to congratulate me. I was anxious about my Sanskrit pronunciation. Papa assured me I had done a good job. Papa stayed in Khar. I'd visit his home. My ties with him and his family were very strong. His 3 daughters were my age. I'd carry extra clothes to his home and stay overnight. His daughters and I would do dhamaal all night. His wife though Gujarati, adopted the Uttar Pradesh culture after marriage, because Papa was from UP. I never heard him saying a bad word about anyone. I met Harivanshrai Bachchan Saab at Papa's place. They called each other 'Bandhu'. I don't think I was so close to anyone outside the family. I discussed all my problems with Papa. He called me daughter but always addressed me as 'Lataji'. I objected to that. But he persisted. When he died of a heart attack, I was heartbroken. No one could take his place."


Majrooh Sultanpuri: "He was close not just to me, but my entire family. He was also very close to my brother Hridaynath. He wrote an entire poem about my voice. He called me 'Bibi' which in Urdu meant a 'good woman'.


Kishore Kumar: "I tied a raakhi to him just before his death at a concert in London. He came to me early in the morning on raksha bandhan. He sat on the floor and went through all the rituals."


S.D. Burman & R. D. Burman: "Burman Dada was very fond of me. It's a well-known fact that he made kheer but invited no one to eat except me. He would feed me special paan which was flavoured with dry orange peel...I was very closer to Pancham (R D Burman) than his father. When he married my sister (Asha Bhosle), he told me to write him a letter as a wedding gift which he stored away in his bank locker. I know Pancham was very unhappy in his final years because of the way his career had gone. I had the privilege of singing in his last film as a composer 1942: A Love Story. He sent me a message to sing. But then he passed away. I sang his song 'Kuch Na Kaho' posthumously.


Likewise, composer Roshan saab. I was very close to him. One of his songs 'Mehlon Ka Raja Mila' in the film Anokhi Raat was recorded by his wife Ira after Roshan saab's death....I was also very close to Mehboob Khan saab. Woh mujhe bahot pyar karte the. Whenever he got to know I was recording in his studio, he would have dry fruits sent for me. He would also invite me for lunch....Salil da (Salil Chowdhary) was also very close to him. Naushad saab was so close to me, I'd often share my problems with him....Hemantda (singer-composer Hemant Kumar) would invite me home for meals regularly. But I was scared because I was allergic to the mustard oil in which the fish was cooked....Geeta Dutt and I behaved like two school girls when we got together...During those days, all of us in the film industry were like one big family."