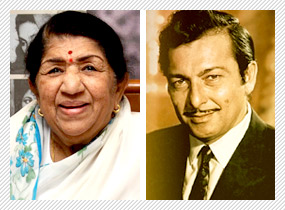 The melodic omnipresence of Madan Mohan is attributable to the timeless quality of his compositions. Madan Mohan's songs pitched their tents in the heart. With considerable assistance from poets Raja Mehndi Ali Khan, Majrooh Sultanpuri and Kaifi Azmi and of course the voice of Lata Mangeshkar (without which Madan Mohan considered his songs adhura) the composer left behind what can only be described as a vast treasury of unblemished tunes.

"He would ask me to observe how Lata and Rafi sang," recalls Sanjeev Kohli fondly. "Particularly as regards Lataji he would tell us to watch that she could never make a mistake. If at all a song would take longer to record than expected, it was because the musicians were making mistakes. This has remained a vivid memory with me. The infallibility of Lata Mangeshkar which I have observed when I have personally worked with her and now I feel I have been working with her since I was a child."

Perfection of quality attainable only through Lata's voice was Madan Mohan's aim for every score, every composition, every note. And money be damned. Rehana Sultan remembered that when she approached Madan Mohan to score music for her production Dil Ki Rahen, he refused to discuss money. "Mar Khana Hai Kya?" Rehana remembers the composer saying. His quest for a completeness in the creative act would sometime lead to ugly, if in retrospect amusing, confrontations with lax lyricists and truant musicians.

Lata Mangeshkar remembers how during the recording of a song for Raj Khosla's Mera Saaya some discordant musicians felt the fire of Madan Mohan's ire: "Madan Bhaiyya had learnt classical music and imbibed the best of the classical singers. It's in this way that the strong foundation of musicianship is laid. He himself sang with a vigorous throat. That's why his geet, ghazal and bhajan were so cogent. Madan bhaiyya was an artiste in the truest sense. And he was extremely melodious. He had composed a very melodious song ('Naino Mein Badra Chaye') based on Raag Bhim Palasi. I was rehearsing before the mike when what did I see! On Madan bhaiyya's face there was anger instead of joy and it was increasing by the minute. Some musicians were playing off-key. Off-key music and Madan Mohan?! No question of that. He sprang lividly towards the musician's enclave. There was a glass door in between. Instead of opening it, he hit the glass door forcefully. His hand was bleeding profusely. But he kept shouting "Besura Bajate Ho? Sur Ke Saath Beimaani Kar Rahe Ho? Sharam Nahi Aati?"

Lataji remembers her first meeting with Madan Mohan at the Filmistan Studios. "By the year 1947, I was beginning to get some recognition. But I knew there were many peaks to conquer. Master Ghulam Haider had called me to record a song. I was happy that such a great music director had thought of me. I happily reached Filmistan. I got to know that a very big film Shaheed was being shot. I had been called to record a duet for it. The person with whom I was supposed to sing this duet was called Madan Mohan. I had never seen him before nor heard him sing. I also came to know that he was the son of the studio's owner Rai Bahadur Chunnilal. It amused me no end. It was a song about sibling affection 'Pinjre Mein Bulbul Bole Mera Chota Sa Dil Doley'. After recording I told Madan Mohan, 'You sang very well'. He replied, 'Haan Theek Tha, I'm going into music direction. You must sing in my first film'. For some reason, I couldn't sing in his first film Aankhen. Madan Mohan was very unhappy about it. He took me home and said. 'The first time we met, we sang a song about a brother and a sister. Today is Raksha Bandhan, come tie a raakhi on me. From today you're my sister and I'm your Madan bhaiyya.' From that day to his last, he was like my own brother."

Sanjeev Kohli remembers how embittered his father was by his lack of commercial success. "My dad began to drink heavily. He died when he was only 51. Providentially, in 2004 I was able to trans-create his unused tunes in Veer-Zara. And I have only Yash Chopra who's my boss, guru and a surrogate father to thank for this. Today, when I hear little kids singing 'Aisa Des Hai Mera', I feel my father has come alive again...I remember while driving for a family picnic, my brother and I were singing all the popular songs of the time like Shankar-Jaikishan's 'Baharon Phool Barsao' and R.D. Burman's 'O Mere Sona Re'. He just looked into the backseat with a pained look that I'll never forget. It's sad, but despite his obvious talent he had to settle for lesser films. The biggies just went to the others."

Until his death in 1975, Madan Mohan did 104 films. The biggest hit of his career Lataji's 'Husn Haazir Hai' from Laila Majnu was released posthumously.