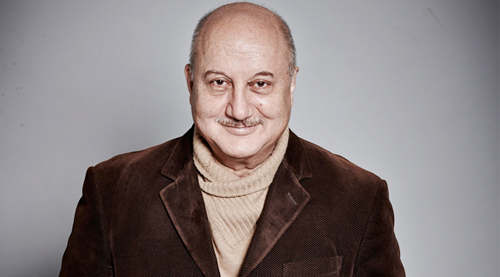 On September 10, Las Vegas declared the day as the 'Anupam Kher Day."


Anupam who has been in the US for the last one month performing his play Mera Woh Matlab Nahin Tha with Neena Gupta, is in a daze.


Speaking from Los Angeles Anupam says, "It's hard to believe all this is happening to me. When I came here it was my intention to take the play through 24 shows all across the US. I neither thought of the impact nor the recognition. You see, I decided to make 2015 my year of reckoning. I suddenly decided to cut down drastically on my movie assignments and do a play. I began as an actor in theatre. So this was return to my roots. That the play would turn out to be so successful not only in India but in the US, was something I never thought."


Recalling that exact moment of the singular honour in Las Vegas Anupam says, "I had no idea it was coming. I didn't even know that the city had provisions for declaring a day dedicated to anyone. I had never been to the city of Las Vegas before. This was my first visit. I knew that some kind of recognition would be given to me in this city too, as I had been getting recognition in all the US cities where we took the play."


Anupam received 20 proclamations all across American cities during this tour of his play. But Las Vegas was the tour de force. "Las Vegas is famous for its gambling. Yahan par log bahot kuch chhod ke jaate hain (people lose plenty over here). But I am leaving with something invaluable from Vegas."


The over-all success of the play Mera Woh Matlab Nahin Tha has made Anupam more sure than ever that life is what you make of it. "Early in my life I decided I'll live my life not the way I am expected to but the way I want to. This decision granted me a kind of fearlessness in facing and conquering every hardship and challenge. I never think about success or failure. I just do what I want to. I've lived with the motto Zindagi Mein Kuch Bhi Ho Sakta Hai which is the title of my memoir, all my life." Anupam Kher's memoir has now been translated into Korean.


He is now looking at doing more shows of the play. "Mera Woh Matlab Nahin Tha has connected with audiences because of its universal emotions. In any part of the world people look for certain basic emotions. Communication through micro-blogging and the social network has made me reach out and connect with young people all over the world. I realize that everywhere people are the same. I am greedy actor and human being. I still hunger to reach out to more and more people."