Koffee With Karan season 6 is making our Sundays eventful and interesting. The blockbuster trio of Baahubali franchise - SS Rajamouli, Prabhas and Rana Daggubati - is all set arrive on the show that has been long overdue. The first promos were released and it seems like fans will get to see a more jovial side of these actors who are otherwise very guarded. 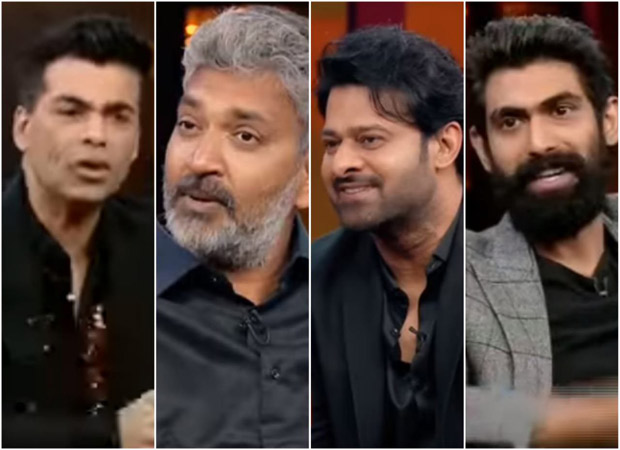 Koffee with Karan 6: SS Rajamouli reveals that Baahubali Prabhas is the real bad boy but Rana Daggubati always gets caught

The promo shows Karan Johar asking a question to SS Rajamouli about who is the bad boy between Prabhas and Rana Daggubati. The director replied, “It is Prabhas, but you would be able to see that.” Rana quipped, “I always get caught, but he doesn’t.”

Karan also tried to get some scoop on whether Prabhas is actually dating his Baahubali co-star Anushka Shetty. The actor said no, Karan did not give up easily and asked if the rumours were true. He looked at Karan and said, “So you have started now?” as the others burst out laughing. Rana, on the other hand, said that he is not dating anyone.

For the first time on television, the superstars from the South grace the Koffee couch! In conversation with @ssrajamouli, @ranadaggubati, and #Prabhas next Sunday on #KoffeeWithKaran. #KoffeeWithTeamBaahubali #Baahubali #Prabhas #Rana

Leave it to @karanjohar to ask these perfect gentlemen, the perfectly wrong questions on #KoffeeWithKaran. #KoffeeWithTeamBaahubali #Baahubali #Prabhas #Rana

Also Read : Koffee With Karan 6: When Vicky Kaushal had to be ROMANTICALLY involved with Karan Johar, and why Ayushmann Khurrana never watched KWK