Koffee With Karan 6 is going on in full swing. The season started with a bang and the host Karan Johar has kept us entertained by ensuring that he gets most sought after jodis in the industry to keep our interest piqued. This week, he had two most brilliant actors of 2018: Vicky Kaushal and Ayushmann Khurrana. Together, they brought the house down with their total filmy behaviour, bromance and oodles of candour. 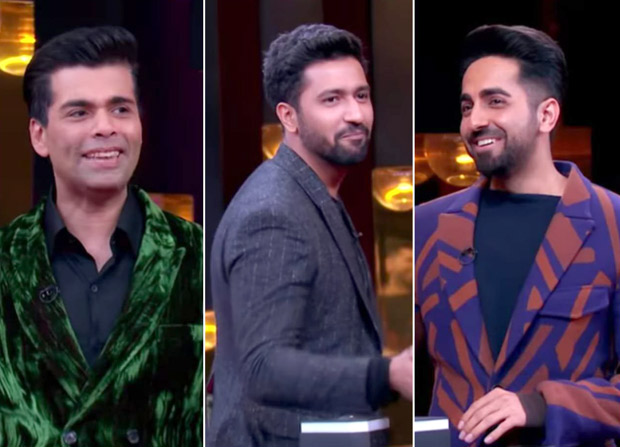 1. When Ayushmann Khurrana confessed why he never watched Koffee With Karan

Ayushmann Khurranna started the show on an interesting note claiming that he never watched the show in last six years because every time he saw another actor up in the couch, he felt a little bad because he was not invited. Guess he doesn't have a reason to sulk anymore! Vicky confessed on the other hand he watched every episode and he's in love with the show.

2. When the boys confessed that they are pretty BAD

Karan spoke about their spotless images both on screen and off screen. He asked them if they were this good in real life too? Vicky's friend on the show admits that he is a very bad flirt in real life and does not pick up on signals sent by women. Ayushmann has a crazy quirk in his personality too. His friend recalled Ayushmann's wife Tahira's dad busting them at their home when they had just started dating.

3. Ayushmann's funny story about approaching Karan Johar while he was struggling
One of the highlights of the episode was Ayushmann making a giant confession from his struggling days. He said that he was interviewing Karan while working with radio and had asked for his number because he wanted to break into acting. The year was 2007 and Karan gave him a landline number to Ayushmann who dialled it but never got an audition because guess why, 'Karan does not look at newcomers’!

4. When Vicky was made to BREAK UP with Ayushmann for Karan
In one of the fun act, Karan asked the boys to do a mock break up scene where even Karan is involved. The scene is that Vicky and Ayushmann are breaking up because Vicky is in love with Karan. Vicky called Karan, “Papa” and Karan Johar said, “Bete, chalo idhar lete?”. During the course of the show, Ayushmann also revealed that he donated sperms for real during a roadie task.

5. Vicky's dating secret revealed
Vicky Kaushal also claimed that he is seriously dating someone and he is pretty much in a secured place with her.