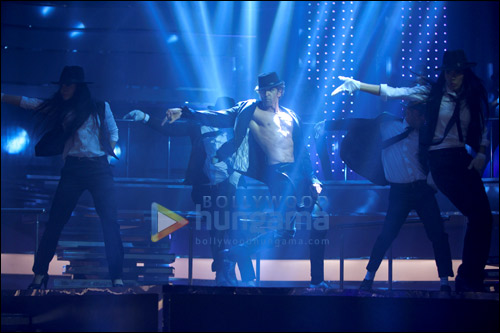 Inarguably the best dancer in Bollywood, Hrithik Roshan, has paid a homage of sorts to the God of dancing - Michael Jackson - by picking his iconic dance moves in the title track of Bang Bang! While Hrithik does an MJ in the video, Katrina Kaif too features at her smouldering best! A complete dance/party number, it is also been looked forward to for Hrithik and Katrina's chemistry which is at it's peak, what with sensuality ruling the show.

Talking about the song and him doing Michael's moves, Hrithik Roshan says, "I have idolized Michael Jackson since the time I first moved to a dance beat. I remember learning the moves through play-pause mode for hours. I love his style and energy, so when Bosco and Sid (Siddharth Anand) said 'Michael Jackson', at first I thought there's no way I could match up, but then I reframed that and did it for my love for him in my own style, my own way. Also, where there is love, there is no fear. That made it fun. The Bang Bang title track itself is outstanding which empowered me further. It's my ode to the inspiration he has been. This is an out-an-out dance/party track. It's high on glamour, scale and Katrina and I have danced our hearts out."

Produced by Fox Star Films, Bang Bang releases on October 2. The film has been directed by Siddharth Anand.