She may not be ready to make a Bollywood comeback as yet but Karisma Kapoor definitely has become one of the popular Instagram celebs. From her appearances to her party shenanigans, the actress ensures that her fans get updates and her love for social media is quite visible from her posts. Recently, we caught hold one such party night in Mumbai and we spotted the actress with an unexpected guest – Elizabeth Hurley. 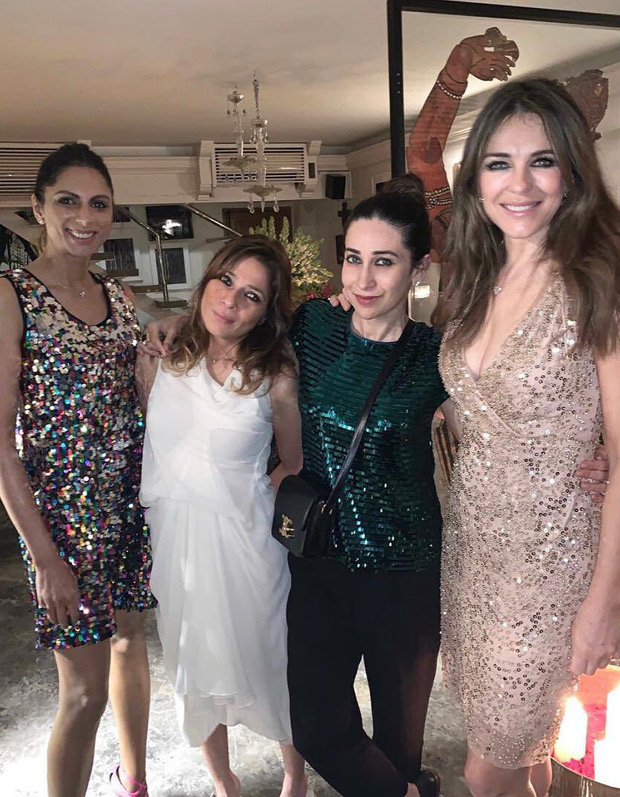 Elizabeth Hurley, a popular English actress and model, was seen hanging out with her girl pals in Mumbai which also includes Karisma Kapoor. While the reason for her visit is still unknown, we do know that Hurley makes frequent visits to India because she herself has confessed her love for the country. Furthermore, it is also a known fact that she was married to an Indian businessman and since then, she has spoken her fondness for the country.

Karisma Kapoor, although didn’t divulge details, excitedly shared the photos as she partied the night away with Elizabeth Hurley and her friends. However, Karisma’s girl gang which included Kareena Kapoor Khan, Malaika Arora and Amrita Arora Ladakh were missing from these party scenes.

Coming to work commitments, Karisma Kapoor will next be seen making her debut on web-series. The actress had recently spoken about how much she loves spending time with her family, especially her two children. The actress is not yet completely keen on making her Bollywood comeback and she is yet to announce about it.