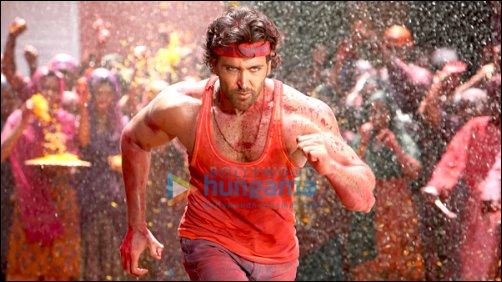 Last night producer Karan Johar unveiled the first look of the much awaited remake of Amitabh Bachchan's 1990's superhit film Agneepath on twitter. The film stars Hrithik Roshan, Priyanka Chopra and Sanjay Dutt in the lead roles and is directed by debutant Karan Malhotra. Karan has also been KJo's assistant director in My Name Is Khan.

Hrithik is seen showing off his toned muscles in a red vest and sporting a head band with 'Govinda Mahautsav' written on it. There is also a lot of red colour and water splashing across. So we presume this is a scene from the Janamashtmi sequence.