A new girl group hit the scene with a slew of exciting, global partners backing them to lay the groundwork for an impact K-pop debut. TRI.BE is the seven-member female troupe that marks the first K-pop group to debut under Universal Music Group Korea and is jointly produced by star K-pop songwriter Sinsadong Tiger and the global entertainment giant Universal Music Group. 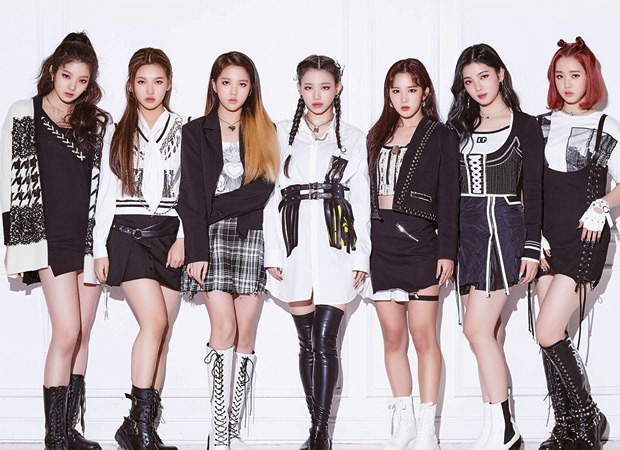 The septet—consisting of members Songsun, Jinha, Kelly, Hyunbin, Jia, Soeun, and Mire—debuted with their two-track 'TRI.BE Da Loca' album release featuring the catchy, genre-jumping lead single 'Doom Doom Ta' as well as the hip-hop/synth-pop punch in B-side 'Loca'. In the accompanying music video to 'Doom Doom Ta', the multinational group is seen wielding guns and hanging with exotic animals for a commanding image to match the hard-hitting track.

TRI.BE and their commanding sound was produced and helmed by one of K-pop’s most reliable hitmakers in S.Tiger (also known as Shinsadong Tiger) who has spent the last two decades building up his music career. Not only has the Korean-music mastermind produced hits for beloved international acts like HyunA, T-ara, VIXX, Apink, and MOMOLAND, but his prominence in producing and managing EXID was also a known fact. EXID member L.E, who is the lead rapper and an integral songwriter and producer for the group, also worked closely on TRI.BE’s debut, co-writing and -composing 'Loca'.

Reflecting on championing the new group, S.Tiger states, “I would say that the music genre was the utmost priority when I was producing TRI.BE. I wanted to produce something that was a mixture of non-mainstream genres in K-pop such as Afrobeat, baile funk, dancehall. This type of production will serve as a major path indicator for TRI.BE’s future musical direction as well as the first step in engraving TRI.BE’s position and identity within K-pop.”

TRI.BE's leader, Songsun shares, "I have been eager and excited about this moment ever since I started practicing. I have been a trainee for nine years before debuting and I had a lot of worries before this debut. I want to be a perfectionist just like my cousin, Girls’ Generation member Yuri.”

TRI.BE Jinha adds, " Our song contains our goal to move forward with confidence. Our goal is to be leading the music shows and charts. Our role model is BLACKPINK, their performances are always cool, and we are inspired by how they perfectly showcase a variety of concepts.”

TRI.BE Soeun elaborates, “Our goal is to win the Rookie of the Year award and come first place in music shows. I also really want us to appear on entertainment shows.”

Further, TRI.BE’s non-Korean members said learning the language was the hardest part of training in Korea, but were able to overcome the challenge with the help of the Korean members.

Republic Records will also be helping with U.S. promotion and guiding TRI.BE navigate the American market, marking the fourth K-pop act to join the Universal Music Group label’s roster behind TWICE, Tomorrow X Together, and (G)I-DLE.

The album is the official introduction for the first-of-its-kind multi-talented quadrilingual group consisting of four Korean, one Japanese, and two Taiwanese members who speak and sing in English, Chinese, Mandarin, Japanese, and Korean. The lead single 'Doom Doom Ta' mashes up the future house, Afrobeat, and Moombahton with a universal groove and unshakable chorus rooted in a spirit of self-empowerment and confidence. Meanwhile, the driving beat of 'Loca' gives way to another massive chant where they announce themselves. These two global bops affirm TRI.BE as a powerful new presence.

TRI.BE’s name is derived from the combination of the words “triangle,” which signifies the most perfect shape, and being, leading to the slogan, “We are perfect as we are.” The group conveys the message of self-love and confidence by unapologetically flaunting their key concept of 'Girl Swag'.

TRI.BE is currently starring in the reality series Let'sTry! be on Studio Lululala’s YouTube channel, created by TV channel JTBC.