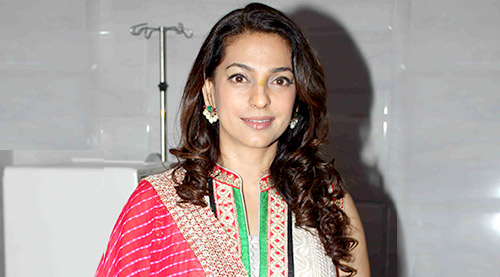 Rishi Kapoor and Juhi Chawla were a very popular pair in the 1990s, having acted in the David Dhawan blockbuster Bol Radha Bol and a string of successful and semi-successful films like Eena Meena Deeka, Saajan Ka Ghar and Eena Meena Deeka.


They will be seen together again in this week's release Chalk 'N' Duster, a film about the importance of teachers in the life of impressionable minds, where Rishi appears for an extended cameo at the climax as a quiz-show host.


And Juhi says it was a pleasurable experience to reunite with her favourite co-star. "It was a joy! Shooting the climax was so much fun. Fortunately, in the climax, the whole cast is present. So, on the sets were Shabanaji, Divya Dutta, Aarya Babbar , Rishiji and myself. We had a ball."


Says Juhi, "Rishiji's entire portion as the quiz host was shot in two days flat. And believe me, it was a lot of shots. The directorial team had done the shot breakdown superbly. But, it was still a lot of work. Those two days we worked 12 hour shifts."
Juhi enjoyed her time with Rishi on the sets. "In between the shots, everyone stayed on the sets to chat. We only went to our vans at lunch time. We all would sit together and have a good laugh. It was great fun because Rishiji has worked with Shabanaji, Divya and myself in many movies. And, of course, Aarya's father Raj Babbarji. So there we were recounting anecdotes. And rolling with laughter."


Juhi Chawla recalls the old days of shooting with Rishi Kapoor. "I remember his table for makeup would be set outside his van. A small transistor would be set and the radio playing on the table .We would watch his make-up Dada painstakingly do the make-up, carefully defining his features. Then, fifteen minutes later, Rishiji would lose his patience and say, 'Ho Gaya.??' Pick up the sponge and rub it all over his face. All the make-up would be mixed up. It was hilarious!!!"


Juhi wishes Rishi had shot longer with her. "When those two days of shoot in Chalk 'N' Duster got over, I really felt a little sad. I was thinking. Those two days had really, really been super-fun. And, now they were over !! Rishiji has done such a wonderful job of the climax, and he did it all so happily and effortlessly! It was wonderful working with him again."