Back in 1992, model Cindy Crawford featured a Pepsi commercial that made waves. The advertisement featured the model arriving at a local gas station and alighting from a vehicle. Clad in a simple white top and denim the girl walks up to a Pepsi vending machine to quench her thirst. This happens while two youths are seen enraptured by the visual before them. Now years after the release of this commercial, Jacqueline Fernandez has recreated the advert for the brand. 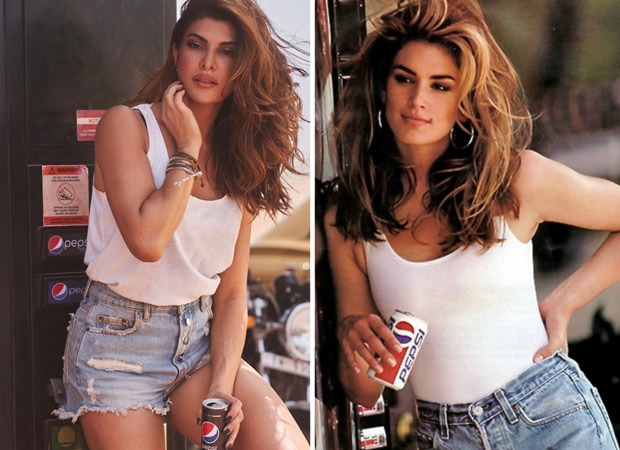 Sharing the video of the new advert along with a few images from the shoot Jacqueline took to Instagram adding, “Pepsi black = Max Taste, Zero Sugar ???????? Go try it! @pepsiindia #pepsiblack #ad”

Also sharing the ad, filmmaker Karan Johar too shared the video saying, “Can’t take my eyes off this new PEPSI BLACK AD!!! This is going to be my go to drink because it has MAX TASTE With ZERO SUGAR!”

Interestingly, the recreated advertisement follows the same lines as 1992 one featuring Cindy Crawford. Looking at Jackie in the new advert we have to say she has done a pretty commendable job of living up to Crawford. Have a look at the Cindy Crawford ad here:

Interestingly, just last year Crawford had recreated the same ad for a Nobel cause. Sharing details on her Instagram of  the same Cindy added, “We returned back to the original Halfway House from  the famous @pepsi commercial I did in 1992 to recreate the moment (with a David Yarrow twist) in hopes of raising funds for the American Family Children’s Hospital”.