Musician Jackson Wang, soloist and rapper in popular Korean pop group GOT7, has ended the month of March on a very romantic note. The 26-year-old singer-songwriter kicked off his birthday month with a series of collaborations including 'Magnetic' with K-pop legend Rain, 'So Bad' with Vava, 'MIA' with Afgan. Now, he has released the much awaited solo track 'Leave Me Loving You' along with very retro-esque music video. 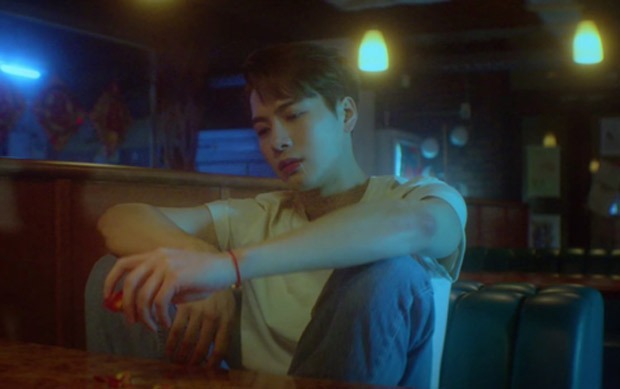 The music video revolves around a dishwasher, played by Jackson, who works at a restaurant. He falls in love with a female customer who often comes to the restaurant and builds an imaginary love story in his head. You see cutesy moments between the two as their love unfolds only to hit the reality that she is marrying someone else. Giving the feel of 90s Hong Kong Chinese movie style, the music video ends with him feeling the heartbreak in love as he sees his love of the life getting hitched to someone else. The lyrics reflect the sentiments, "What if I just hold on for a while / Baby there’s no drug quite like denial / Oh my, if this is goodbye / Don’t leave me loving you / But whatever you do / Don’t leave me loving you / If you tip toe out in the morning / I need a warning."

It does feel like it is a follow up to 'Pretty Please' which was more inclined towards a fantasy romance whereas this one gives the authentic one-sided love story. The music video is directed by Jackson Wang and Mamesjao. As soon as the music video ends, you see how it was all shot. From the time the concept was finalized to shooting with the entire unit, Jackson previews his work in the behind-the-scenes footage.

"For the music video, I came up with the treatment that follows my previous release 'Pretty Please'. Still staying in the time zone of 90s Hong Kong Chinese movie style. The way I decided to shoot the video, it's more towards movie structure this time rather than musical and choreo performances that I usually do," Jackson Wang says in the video.

Jackson Wang participated in the writing, arranging and composing the song along with Michael Matosic, Richard Boardman, LOSTBOY & Pablo Bowman.

Jackson Wang kicked off 2021 with his track 'Alone' and it followed the success of his latest single, 'Should've Let Go', with Singaporean singer-songwriter JJ Lin and was released in December 2020. In 2020, Jackson Wang released two more singles including '100 Ways' and 'Pretty Please'.