Last Updated 03.12.2021 | 10:50 PM IST
feedback language
follow us on
Bollywood Hungama » News » Bollywood Features News » Ishaan Khatter has a major WARNING to give to Rajkummar Rao and it is about Janhvi Kapoor

Not too long ago, Janhvi Kapoor was seen speaking about her fangirl moment with Rajkummar Rao during a show hosted by Anaita Shroff Adajania. Her love for the Stree actor was quite visible in her comments and there was a time when she would comment ‘I Love You’ on his pictures! Recently, when Rajkummar Rao met Janhvi’s friend and former co-star Ishaan Khatter, the latter had some interesting piece of advice for Rao who will be collaborating with Janhvi in his next titled Rooh-Afza. 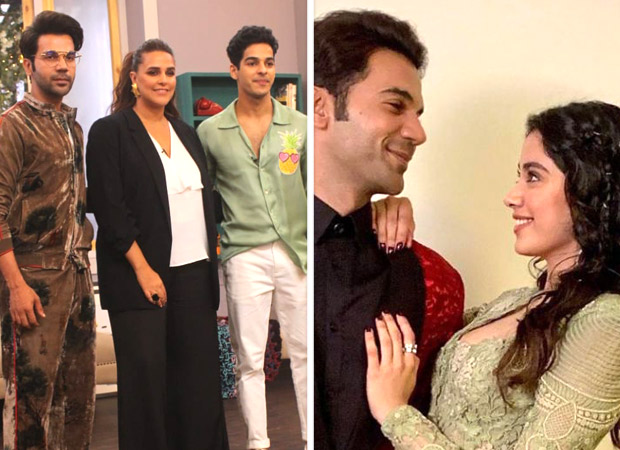 Ishaan Khatter and Rajkummar Rao are coming together for the first time on the Neha Dhupia show BFFs with Vogue. In the recently released promo of the episode featuring the two, we can definitely see the actors having a fun session with the host. Amidst all of it, their common subject was Janhvi Kapoor when Ishaan had an interesting piece of info to share with Rao. He reportedly warned Rajkummar of being wary when it comes to Janhvi because she is obsessed with him.

It hardly comes as a surprise considering that Janhvi Kapoor has already accepted her love for the actor on social media many times. During her last appearance on a chat show, she had also said that Rao sometimes finds her creepy considering the fangirling she does around him. In the same breath, Ishaan also added that his Dhadak co-star is a keen learner and that she is genuinely fond of Rajkummar’s work just like he is!

Janhvi Kapoor made her debut with Ishaan Khatter in Dhadak. Coming to Rooh-Afza, the film is a horror comedy, with Janhvi playing a double role in the film.

Also Read: Janhvi Kapoor opens up about commenting I Love You on Rajkummar Rao’s Instagram posts