Dumping the conventional yellow, actress Ankita Lokhande showed up as a bride in red at her haldi ceremony. The function was held in Mumbai on December 14, and from the pictures and videos that went viral, it looked like a fun-filled event. Ankita Lokhande is all set to tie the knot with fiance Vicky Jain today, and the couple has been hosting their family and friends for a three-day extravagant event. 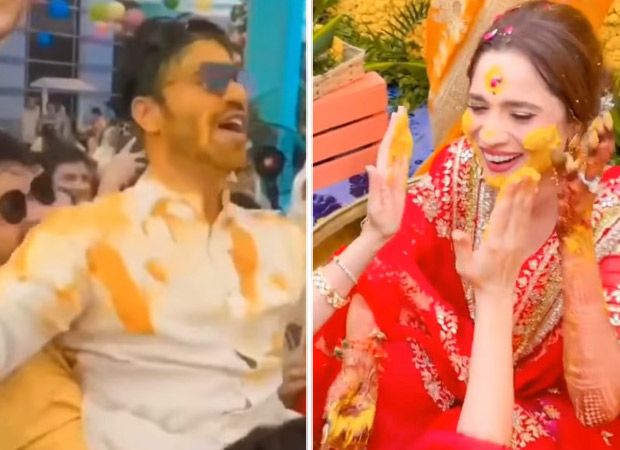 Inside Videos & Photos: Ankita Lokhande grooves to ‘Aaja Aaja’ with ‘Vicky Jain at her haldi ceremony

Last night, the mehendi and engagement ceremonies were held which saw Ankita Lokhande and Vicky Jain putting up a stunning performance. Appearing at the haldi ceremony, in the photos and videos, friends and family were seen applying the traditional paste on the couple. However, it’s their dance video that has been winning hearts on the internet. As friends picked up Ankita and Vicky on their shoulders, she as seen singing ‘Aaja Aaja’ to her dulhe raja. The video gave a glance of the fun time the couple is having at their pre-wedding festivity.

Appearing in their trousseau, Ankita chose a red sharara with a kurti, which was embroidered with golden needlework. The groom-to-be-on the other hand picked up an off-white kurta with thread work. He matched it up with his trademark aviators to add more glam to his look.

Ankita Lokhande and Vicky Jain have been dating for a while but made their relationship public a few months back. Their wedding, which is said to be a grand yet private affair, will also be attended by actors Amruta Khanvilkar, Aparna Dixit, Mahesh Shetty, Sana Makbul, Mahhi Vij, Aarti Singh among others.