Ranveer Singh was at India vs Pakistan match during the ongoing ICC World Cup 2019 and he wowed everyone with his cricketing knowledge and respect for the iconic cricketers at Manchester. So much so that Kapil Dev, who was watching the match, sent him a text message appreciating his commentary skills! 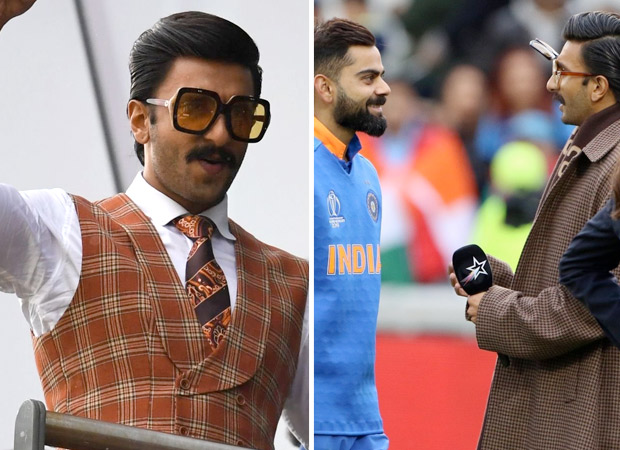 “Ranveer is shooting '83 in London and he went to see the big ticket World Cup match between India and Pakistan. Given his presence for the match, the broadcasters looped him in to do an impromptu commentary and to everyone’s surprise, Ranveer wowed everyone with his cricketing knowledge. He was incredibly respectful to all the iconic cricketers who he met and who were on the panel at the commentary box. He was thorough with all the statistics and made pertinent points while discussing the match with the stalwarts,” says an eyewitness from London.

“Ranveer plays Kapil in '83 and interestingly Kapil was watching the match and listening to the commentary. He was so impressed with Ranveer’s commentary that he texted him and congratulated him for doing such a good job on his debut at the commentary box. Of course, Ranveer was thrilled to receive this message and his excitement was visible to everyone at the commentary box. Ranveer brought energy, wit and his inherent charm and everyone enjoyed his presence,” adds the source.

Ranveer Singh was seen on the field giving his insight on the match and even sat in the commentary box with Sachin Tendulkar, Virendra Sehwag, Sunil Gavaskar and Sanjay Manjrekar. He danced with Sunil Gavaskar on 'Badan Pe Sitare' in between breaks and Harbhajan Singh shared the video on his Youtube channel.

Post the grand win against Pakistan, Ranveer was seen meeting Captain Virat Kohli and greeted him with a hug. He even shared a laugh with MS Dhoni and showed him some video that made former Captain cool laugh. All in all, Ranveer Singh seems to be in his element and ready for his cricket biopic next year on April 20, 2020.

One of #TeamIndia's biggest cheerleaders has been backing the Men in Blue and is pumped for the epic #INDvsPAK clash! ????

Look who gave a low down of the BIG CLASH between India & Pakistan LIVE from Old Trafford before the start of the game - @RanveerOfficial himself #TeamIndia #INDvPAK #CWC19 ???????????????????? pic.twitter.com/NaNKOY5YEw