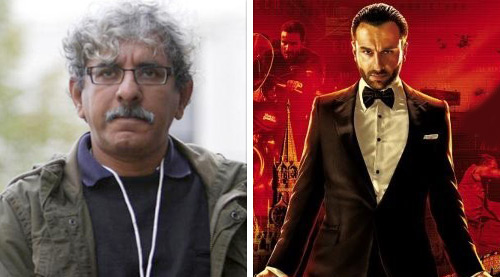 Sriram Raghavan's directorial oeuvre has been brief and interesting. He began with Ek Haseena Thi, a revenge saga featuring Urmila Matondkar as woman

scorned by Saif Ali Khan. After the tepidly-received espionage drama Agent Vinod, Sriram is back with a vengeance...literally. Badlapur is a revenge drama with Varun

Dhawan playing a man determined to get even with his party-crasher. The director in a conversation with Subhash K Jha.

What made you jump into Badlapur after Agent Vinod?
I was very pissed off with the poor performance of Agent Vinod. We all

wondered what happened! Not that it didn't have flaws. But there were a lot of good things in the film that got swept inside.

Were you hurt and worried about your future?
Hurt, yes. But I wasn't worried agla kya karna kya.... I began reading with no particular idea of what I'd do next. I wasn't sure what I wanted to do next. Agent Vinod was

So how did you decide on Badlapur?
I was reading up on real-life crime when I came across this account from a prison in Central Europe. We got the rights of the crime story and used it in an Indian setting. Though the

original crime happened in Europe there was universality about the emotions that worked for me.

Badlapur is based on a true-life story?
Yes. But we've just taken the skeleton of the original story. After that, we've added our own characters. So, it's kind of based on facts.

Badlapur sounds and looks like a very dark film?
I'd like to think my film is dark in the sense that Yash Chopra's Trishul or Gulzar's Mausam are dark. When we talk about dark films, we tend to think of stylish cinematic

films. Badlapur is a very slice-of-life film. As the revenge drama unfolds, you'll wonder if you and I would behave the same way as Varun's character if the same tragedy happened

to us. In that sense, it's a morality tale.

It looks a like very basic revenge drama about a vengeful hero,

the wrong-doing villain and the slain heroine?
Yes, in a sense it's a tale of lost innocence, almost like a short story where the basic characters play out their karma in a tightly wound plot. But it's not an action movie as the promos

seem to suggest it to be.

It's interesting you chose Varun Dhawan to play the anguished hero?
Varun Dhawan was my first and only choice. I hadn't seen Student Of The Year. But, we had met a couple of times. And I had pitched another story to him. I happened to casually

mention the idea for Badlapur, and Varun latched on to it. I never thought Varun would be interested in this. In fact, I thought his father (filmmaker David Dhawan) would call me

up and tell me to keep his son out of this.

Did that happen?
No. David was my senior at the film institute. I think he believed in Badlapur as much as Varun. After we spoke about it, Varun would call up almost every day and asked about

this scene and that scene. Finally, he asked me if he could pull this off. I was sure he could. I'm happy to say Varun has given to the film more than what I expected.

You are happy with Varun?
I am happy with my entire cast. It is very rare to get exactly the actors required for every character.

Why not Saif for Badlapur?
Why not? This could be the story of a 35-year old man. When Varun came into the picture, we began seeing this as the story of a guy who married at 21 and had a child at 22.

You made modifications to accommodate Varun?
In the earlier scenes, you'll see him how he is. But in the later part of the film, when he has to play a man much older than he is, Varun transforms into another actor.

Did you have to tutor him into trauma?
Varun had never experienced bereavement. He began talking to people who had lost people close to them. I told him how I had broken down after four days when my dad died, that

first one goes into denial when faced with loss. Then, he got into the matter of grief and bereavement in an obsessive manner. He would come relate how he met people who lost some

dear....a family friend whose wife suddenly had a heart attack on the sofa, and so on.

Did you have to work hard on making Varun look older?
We had one month's shooting for him to make the age-transition. When he came back, he was a different person. He had completely internalized the character and even took it home.

Was Nawazuddin Siddiqui also your first choice for the villain?
While writing the script, I named the character Nawaz with the promise to myself that, if he didn't do the role, I'd change the character's name. When I finally gave him the script, he

was on right away.

Agent Vinod didn't work. When are you working with Saif Ali Khan again?
I've never been bothered much about what the box-office would think of me. Even Ek Haseena Thi and Johnny Gaddaar didn't set the box-office on fire. But people still

remember those films fondly. So, when Saif and I work together, it won't be to redeem ourselves after Agent Vinod.

What next?
I've got the rights of Vikas Swaroop's novel The Accidental Apprentice. I've worked out a screenplay. I need to hone it up and then cast for the film. That's going to be my next