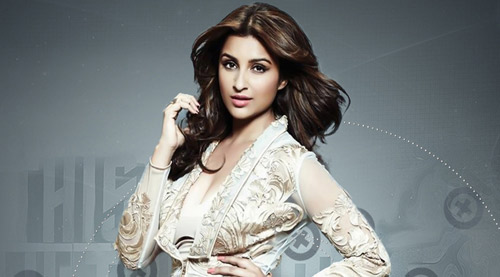 Being a foodie did you enjoy doing Daawat-e-Ishq?

Yes, all three of us Anupam Sir, Aditya Roy Kapur and I, love food. I'd say Daawat-e-Ishq is a celebration of love and food, love for food, love over food, and what have you.

We love food. But strangely we don't have too many Indian films about food?

It all happens in good time. We can't have films about food just for the heck of it. There has to be a proper story to tell because it stretches to a two and a half hours of playing time. Though food plays an important part in Daawat-e-Ishq, it is at the end of the day a love story.

Did you eat a lot during the film?

Oh, we were constantly eating. Every other day there was a sequence showing us eating and the scene would go on the entire day, so you can imagine. We ended up eating all the time.

Did that mess up your metabolism?

No. I think my body was quite happy with all that food (laughs).

Daawat-e-Ishq is your second film with Habib Faisal. How was the comfort level this time?

And God willing, you will work with him once again. You're very addictive?

Who said that? (laughs) It would be an honour to work with him.

What's it like working with Shaad Ali in Kill Dill?

We're releasing on November 14, Children's day. So I've a release on a National holiday.
I think I am in awe of Shaad. When I got the offer I was happy I was going to work with the director of Saathiya and Bunty Aur Babli. But now that I've got to work closely with him, my love and respect for the person that he is, has touched the sky. He is a joy to work with. No matter how much the stress on the sets he's always in a good mood. When a director is not temperamental then the actor looks forward to going to the sets every day. For us actors in Kill Dill-Ranveer, Govinda and me-Shaad is not just a fantastic director but also a friend. When we finished shooting we partied together.


Ranveer and Shaad are very close friends, so were you the outsider in the beginning?

Oh yes, for sure! I already shared an equation with Ranveer. I used to manage his career when I was working for Yash Raj films. He was also my first co-star. But I didn't know Shaad at all. But within five minutes of meeting him the ice was broken. It's not difficult to get along with Shaad.

He's an introvert and you're an extrovert?

Shaad is not an introvert! He talks a lot. He is constantly joking and laughing.

So after Rani Mukerji are you the new Babli in Shaad Ali's cinema?

Ha ha. I hope not. I am not at all the bindaas bubbly type in Shaad's film. I am very different in Kill Dill from the way I am seen in my other films. That's what we all from the Kill Dill team believe. So far I haven't done anything that's glamorous, be it Shuddh Desi Romance or Hasee Toh Phasee I've so far pretty much played the normal working-class girl.

So are you following the Yash Raj tradition of heroines getting into a bikini?

No no no! I am not doing anything that startlingly glamorous. But let me tell you I'm sure I'll wear the bikini at the right opportunity. I've to get into the right shape for that.

For that you'll have to cut down on your pizzas?

Hai na? It's impossible for me to cut down on my pizzas entirely. But I am trying. But Kill Dill doesn't really require me to be ultra-slim. I play a girl from Delhi and I've to dress, look and speak in a certain way. It's not as if I, Parineeti Chopra, would go out of character to prove how glamorous I can look.

Why is such a fuss about what you wear?

Wearing western outfits is not such a culture shock for me, as it is made out to be. I am unnecessarily being slotted as the girl next door because I guess every heroine has to be put in a compartment.

I think slotting you as the girl next-door belittles your versatility?

That's what I feel too. Whenever I am asked this I've to spend half an hour explaining why I feel I don't need to be slotted as the girl next door. Like when I am asked, 'Oh, you excel at playing the loud Punjabi girl'. The funny thing is, I've only played Punjabi in my first of my four films released so far. I was not Punjabi in Ishaqzaade or the subsequent films.

Then why this perception?

Maybe some people think just playing loud characters makes me Punjabi. But if you think about it the girl I played in Hasee Toh Phasee was very different from the girl in Ishaqzaade. I hope Daawat-e-Ishq and Kill Dill kill that image.

Are you hoping to win awards this year for Hasee Toh Phasee?

I think I was okay in it. When I look back at my performance I can see a hazaar flaws. Honestly I can't rate myself.

You seem to have worked with all the younger actors. Now do you look forward to working with the more senior Khan and Kumar superstars?

I am doing a film with Saif. I am very excited. I don't plan too far in the future.

What about a boyfriend. One never hears of you being linked up with anyone?

Oh, there is one linkup, with Maneesh Sharma that's always there. That rumour never goes; maybe because I spend a lot of time with him even go out with him. Over here if you are seen with the same man more than once you're presumed to be involved with him. But the truth is I haven't really found a person to be in a relationship with. I am looking forward to that.

I am sure there's someone waiting for you out there. We have Mr Yash Chopra's word for it?

In that case he better come out in the open quickly.