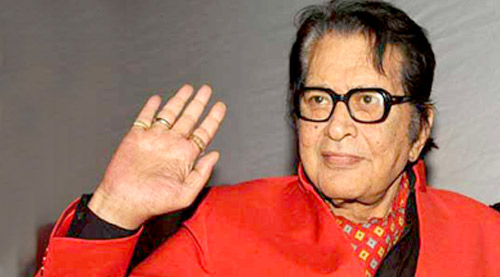 Why haven't you directed a film for so long?

I haven't been able to make any film because of my back problem. But now, my script is ready. It's a film called DNA Report. It's about how a man becomes a victim of a DNA test when he has never had

any emotional or physical relationship with a woman. Then how does the DNA report say he's the father of the woman's child? This is a subject I've never been into.

Do you miss working with likeminded actors?

Sadly, I don't have the comfort of working with Manoj Kumar the actor anymore. He is capable of telling home truths in the most understated manner. So I've to select from the stars today.

Akshay Kumar is a big fan?

He has great respect for me. In his film with Katrina Kaif Namaste London, he said, 'If you want to know what India is all about, take a look at a DVD of Purab Aur Pachchim, and you'll know. In fact,

Purab Aur Pachchim is the mother of many subsequent films.

In your best films, you have worked with some of the greatest talents...

I have an eye for talent. Do you know in Shor, when Sharmila Tagore ditched me (she was supposed to play my wife's role that Nanda finally played) I had offered that role to Smita Patil. She politely

told me she was not interested in acting at that point of time. God has given me honest eyes and pure ears.

How did Manoj Kumar 'the Star' become a director?

I never intended to be a director in the first place. I became one by default when during Shaheed, I had to direct the film unofficially. Then Lal Bahadur Shastri raised the slogan of Jai Jawan Jai

Kisan. That's how I made Upkar. I give credit for my success to my parents.

Your parents must have been very proud of your achievements?

My father was a poet philosopher. I came to Mumbai with two targets. One was to be a hero, the other was to make 3 lakh rupees, 1 lakh each for my two parents and 1 lakh for my siblings. When I had left home

in Delhi in 1956 to come to Mumbai to become a hero, my father gave me a letter. In that letter, he said, 'My blood can never commit blunders, only mistakes'. I made mistakes in my career. But not blunders.

Why haven't you acted or directed for so many years?

I am not a greedy film person even as an actor. While my contemporaries Dharmendra and Shashi Kapoor acted in nearly 300 films each, I've done hardly 35 films in my entire career.

What went wrong with your last directorial venture?

According to me, Kalyug Aur Ramayan was my best script. But, because it went through a lot of changes it lost its sheen. My characters were called Ram and Sita. There was a song in the film 'Kalyug

Board threatened to ban the picture. I changed the title from Kalyug Ki Ramayan to Kalyug Aur Ramayan. The film was not the same any longer.

You've directed masterpieces like Upkar, Shor, Purab Aur Paschchim and Roti Kapada Aur Makaan. Which is your favourite among your films?

Shor in 1972. It was about a man and his son. I remember I had gone to sign Jaya Bhaduriji after seeing her in Guddi. I told her, Shor is about a father and son. The son can't speak and

the father pines to hear him. But the day that the son speaks, the father can't hear any more. No Indian film had been made on such a thin storyline. And that is the only film I directed in which I was not

Shor's message on noise pollution was way ahead of its times?

Do you know they took one sequence from Shor and made an Iranian film in 1987 called The Cyclist which won numerous awards. Shor was the first film that I edited myself. The great

Hrishikesh Mukherjee, who was the Chairperson of Editors' Jury, gave me the Filmfare award for 'Best Editor. Coming from such a skilled technician that was a special challenge for me.

Do you feel isolated from today's cinema?

I am not brooding about it. But when I read the interviews of actors whom I gave major breaks to and they don't even mention me, dukh to hota hai.