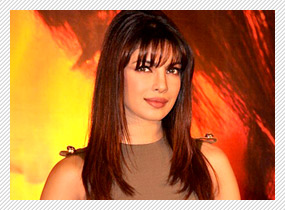 Priyanka Chopra is one happy lady. While she has been fetching awards till date for her performance in Barfi!, her international assignments have gained further heat as well. First step in this direction is the music video of her international single 'In My City' which was unveiled yesterday night. On her way to Canada to promote her single and lend it a huge international platform, Priyanka gets talking about how the video is special for her and why she wanted to be seen as a quintessential Bollywood heroine in there.

Finally the music video is out as well. For you this must be a huge kick-start to the New Year, isn't it?

Well, it is an amazing thing to happen and I am very excited about it. The song has done tremendously well and now it is my first own music video. I was particular about it to turn out really well. I wanted a right amalgamation of Western mood and Indian flavour. In fact that is the most amazing part about the video because both Will.I.Am and I are playing ourselves. So get some for some Western setting and some Bollywood 'thumkas' (smiles).

For someone who has been associated with the glamour world for more than a decade, what's the significance that this video brings for you?

(Pauses) See, for me it is sort of expanding myself creatively and pushing the envelope. I am very proud of the video. From whatever I can tell, it seems to have been pretty well received. My family has seen it and so have some close friends and acquaintances. The feedback has been good.

So what are the plans for the video? Are we seeing a wide day and time international release where it would be all over across 100 odd countries in one go?

It is seeing an international release for sure though exact scheduling would be best known to the marketing people. They would keep me posted for sure. Of what I know is that I was certain about kick-starting the launch in India. Now I am headed to Canada for promotion. We would also be heading to US and Sweden and then slowly move to the other countries. We should be all over.

Well Priyanka, one would have expected you to be all over after delivering three big 100 crore successes, starting from Don 2 to Agneepath and then Barfi! It is surprising that there hasn't been much noise made around that front. Why so serious?

(Smiles) You know me for so long now; I am not a sort of person to make noise about myself. My work speaks for itself. Moreover I am a little shy as well. Apna dhindhora peetne ka kya faayda?

Tags : In My City, Priyanka Chopra