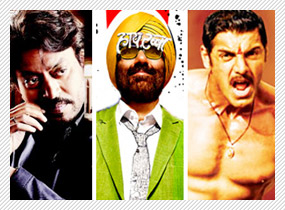 Both films faced critical flak and mixed audience reactions but have made big money, dwarfing any releases alongside.

What's more, ten more sequels will hit the screen in the next 11 months, averaging almost one every five weeks! Here's the list, not necessarily in

chronological order: Murder 3 (the next in line), Once Upon A Time In Mumbaai Again, Saheb Biwi Aur Gangster 2, Aashiqui 2, Yamla Pagla Deewana 2,

The success of Race 2 is a clear-cut example of a brand working big-time. Says trade analyst Amod Mehra, "Because the original film is a hit, there is

a definite desire to watch the subsequent installments. So the interest level is high. Race 2 had another big advantage - the five-year gap resulted

in a fresh audience - youngsters who were in school then were now in college."

What Mehra implies is clear: the only built-in hazard that a sequel can have is that audiences who did not like the earlier part can stay away, but this has

have not watched the original! This is an inborn advantage to forthcoming films like Krrish 3 (so-called because Krrish was a sequel to

Koiâ€¦Mil Gaya) and Dhoom 3, because the last films in these series came seven years ago.

On the flipside, this could also be one reason why Dabangg 2 was a super-hit but a failure as a franchise. Explains Mehra, "Making sequels has become

a global phenomenon today. But ideally, each subsequent film in the series should be a bigger hit with the audiences. Dabangg 2 made the same money as

the first film, but because of more screens and higher ticket rates. It was also lesser appreciated. On the other hand, Lage Raho Munna Bhai made much

Again, the main objective is clear: the audience connection has to grow, even if the quality may not rise every time! Golmaal - Fun Unlimited did

Prior to 2006, sequels were a rarity in Hindi cinema, and almost all bombed, like Nagina /Nigahen. But now sequels have come on the fast-track.

Golmaal 3 was the first to release its third part, but we have had a deluge of sequels in the last few years, with the successful ones including

Sequels can be categorized essentially into two categories - true sequels and sequels "in spirit", so to speak. The first category can be again split two

ways: where the story moves on (Koiâ€¦Mil Gaya to Krrish and Krrish 3, Hera Pheri to Phir Hera Pheri, Dhamaal, Dabangg and Race) or where

the same principal characters are placed in different stories, not necessarily with a logical link (Dhoom, Dhoom 2 and the Munna Bhai and

Note how Munnabhai even marries different women and follows different occupations in the two films and the Golmaal foursome, where characteristics are

retained, like a volatile protagonist (Ajay Devgn), a mute (Tusshar Kapoor) and so on while stories, plots and locations change. The same is likely to be the

The other kind of sequel only follows a general similar tenor. This is the most obvious kind of money-making device, of making a story in the same genre that

is otherwise completely different, to capitalize on a hit brand. Interestingly, two films lined up for release this year, Shootout At Wadala (after

sense that they actually narrate fictionalized real (but completely different) stories set in an earlier era than their originals. The most successful sequel

in this category remains the 2012 Housefull 2.

Clearly, however, the broad use of franchises for films that otherwise have nothing remotely in common but for the title suggests a combination of a creative

stagnation mixed with pecuniary ambitions. The Bhatts (Mukesh and Mahesh) have been showing a special yen for sequels, reprising their own brands like

However, to their credit, the second Raaz and Murder went a creative, if not commercial, step ahead, the former actually exposing a social evil

- of multinational companies exploiting Indians for business, while Murder 2 expanded the connotations of the crime (the title) to a man killing his

victim without even knowing or meeting her!

sequel in spirit to the 2006 hit Malamaal Weekly) and Bheja Fry 2. Says Mehra, "A sequel can be compared to a star-kid. It has the initial and

significant advantage of being a known entity. But just like any new actor, it will work or fail only on its own merits or demerits." Even in sequels, as he

points out, success cannot be designed or taken for granted, though the track-record of these films is a lot better than that of remakes.

Nevertheless, branding does come to the rescue of shoddily-made films like 1920 - Evil Returns and Kyaa Super Kool Hain Hum and help them break

even. So in a field where business was always vital and went hand-in-hand with art but is now tending to overrule it, sequels will continue to be an easy

option. No Entry, Wanted, Singham, Rowdy Rathore, F.A.L.T.U., Haunted and many more are being cooked up in the years to come.

And doubtlessly, we can then do a sequel to this story!