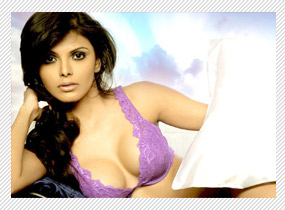 In Part I of the article, we read about how at least in the virtual world, it is obvious that a large segment of netizens are far more enticed about the likes of a Sunny and a Sherlyn; a fact that cannot be shunned. Though Sherlyn has surprisingly gone quiet for over a week ever since the 'cucumber' episode, the nostalgia of the growing up years still stays.

Read on in second and concluding part of this special feature.

The verdict was out

1992 - By this time around, it was clear though that 'liberalisation' had set in. Yes, Congress had started it a few years back and that impacted the country's economics. However, the well being of audience was taken care of by Censor Board turning liberal as well as far as public screening of content was concerned. No, it isn't as if nudity wasn't available for consumption. 'Jai Ho' South India that had resulted in the likes of Silk Smithas and Disco Shantis satiating the fantasies and carnal desires of millions out there. However the experience is entirely different when you get hold of a poorly shot content or watch it in a dingy tent like theatre vis-Ã -vis catching hold of that High Definition DVD or ogle at a 'Sunny without a saree' in a national daily over a morning breakfast or share more than just a glance at Sherlyn and her cucumber escapades. After all, the 'right to information' over a piece of 'news' can't be denied, right?

There are some trying to keep the 'tradition' alive though

I belong to the generation that was not quite exposed to watching the likes of Asha Parekh, Vyjayanthimala, Waheeda Rahman, Nanda or Sadhana on the big screen. However what I am definitely aware of is that these were the actresses who were seen as 'ladies' and not just a female lead. Known for making sarees fashionable, they were constantly draped in this attire and made it a fashion.

A jump of few decades showed the glam divas making it all count with their 'saree' appearances. Sushmita Sen is the one who is remembered most for her teacher act in Main Hoon Naa. Rani Mukerji brought raw sexual appeal on screen while being casually draped in a 'saree' for Yuva. Shilpa Shetty appeared all of 60 seconds in a special appearance for 'Deewangee' (Om Shanti Om) and made one believe that 'saree' was made just so that it could be worn by her one day. Much before them even Raveena Tandon had managed similar expressions while getting drenched for 'Tip Tip Barsa Paani' (Mohra).

Circa 2012 and most of the top actresses are enjoying (and perhaps demanding) at least one major on-screen appearance in a 'saree'. Kareena Kapoor, who was off the saree for a longest period, ensured that when a pensive love song ('Teri Meri Kahaani' - Bodyguard) came calling, it was 'sarees' of different shades and designs for her. Of course the idea was to bring on her sex appeal and thankfully the results were positive as well.

With Heroine round the corner, expect many more 'saree-ful' appearances.

Katrina Kaif too may have a 'Chikni Chameli' or 'Sheila Ki Jawani' to her credit but the song that still continues to be easiest on eyes is 'Teri Ore' (Singh Is Kinng). Priyanka Chopra made much better impact in a single song ('Desi Girl' - Dostana) than she did in an entire film (Agneepath). In the former, she was wearing a saree for all of five minutes. In the latter it was around 20 minutes but the shimmering white is what made a long lasting impression. The same white didn't quite work though for Deepika Padukone who wore a 'suti saree' all through the length of Khelein Hum Jee Jaan Sey.

On the other hand, there are some who seem to have made a career decision of wearing 'sarees' and just 'sarees'. Vidya Balan started it all with Ishqiya, Paa, The Dirty Picture (though she used it to her advantage here) and the all-important climax sequence of Kahaani. Today one can catch her in this attire, both on as well as off the screen, all the time.

On the other hand, even though off screen Sonakshi Sinha is attempting at an image change of sorts by trying out different attires, her on screen success (Dabangg as well as Rowdy Rathore) may well require her to wear a 'saree' more often.

The exceptions and the non-conformists

Though one expected Aishwarya Rai to be seen in a 'saree' more often, except for Guru, she has largely stayed away from the attire. Asin, at least in Bollywood, has largely stuck to conventional outings while Bipasha Basu, another lady who could have looked gorgeous in a 'saree', has taken the Western route. As for newbie girls like Anushka Sharma and Sonam Kapoor, one waits to be surprised once they choose the whole nine yards.

On the other hand, the non-conformists here have been, as expected, Sunny Leone and Sherlyn Chopra. 'Jo Main Chahti Hoon, Woh Main Karti Hoon; Aur Jo Public Chahti Hai, Woh Main Definitely Karti Hoon', could well be the motto that the two women must be carrying. Just when the world thought that 'what more' is actually left to be shown in her armour, Sunny decided to make 'saree' as her weapon and posed in it for a magazine cover. Yes, that was an Indian voyeur demand to see her in a saree (only to disrobe her in his fantasies). Well, Sunny was 'definitely' more than happy to oblige. She wore a saree and well, practically that was the only thing she wore, hence making the job easier for a 'Great Indian Male Fantasy' to come alive.

Sherlyn didn't have to make it really difficult though. Her Twitter act pretty much announced the challenge loud and clear that now if anyone had to come up with a shock quotient, it had to be really bigâ€¦.and out of the box!

Is anyone out there up for that challenge?