The title makes you want to go ‘Balle Balle’ in a sarson ka khet but while the setting and the flavour is small town Punjab, Arjun Patiala is very much a Bollywood comic caper with Diljit Dosanjh in the titular role.

“Diljit will be seen in the uniform but very different to his avatar in his first Hindi film outing, Udta Punjab, who is out to bust a drug cartel. This policewallah is a laugh-a-minute character with a swagger that is all Diljit who will have you rolling with his quirky sense of humour which he has trademarked back home,” promises Dinesh Vijan, who is producing the film with Bhushan Kumar. 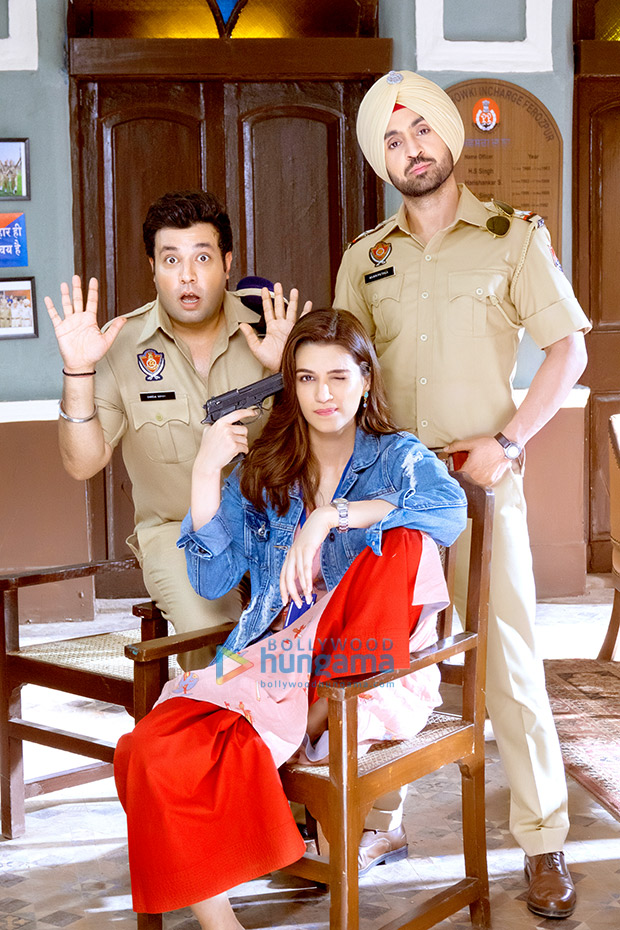 Varun Sharma, another actor known for his comic timing, plays Arjun’s lackey. After Fukrey’s Choocha, the actor will be seen as a cop with a sarcastic tongue and an arrogant stride, who goes by the name of Onida Singh. The two of them will wrestle the system with their crazy antics

Joining the duo in their efforts to bring law and disorder is Kriti Sanon, who after Bareily Ki Barfi’s chirpy Bitti Mishra, has landed another desi girl role. Its love-at-first-sight as Arjun finds his match in this scoop-hungry crime reporter with a TV channel.

The trio has a baddie to contend with as Zeeshan Quadri steps out of his ‘good friend’ avatar to roam the campus, his hair tied up in a patka, piling up the corpses without batting an eyelid. His character is called School, pronounced in the Punjabi way as Sakool.

“The Rohit Jugraj-directed laugh riot offers plenty of action and dollops of bubble-gum romance. We believe in doing something different every time, and since we have never attempted an out-and-out comedy before, we decided to experiment with one which is more situational than slapstick. If this film works, we would be happy to spin a franchise with Arjun, Onida and Ritu returning as the principal players. We already have an idea for Part 2 and like Golmaal and Fukrey, Arjun will be back with a Patiala peg every couple of years,” informs Dinesh.

The film which has just wrapped up after an extended schedule in Chandigarh and a last-leg shoot in Mumbai, is scheduled to hit the theatres on September 13.

“Who says Friday the 13th is only good for horror?” asks Dinesh. “We’ll prove that it can be a good day for laughs too.”

Also Read: FIRST LOOK: Diljit Dosanjh fans are in for a treat with his latest cop avatar in Dinesh Vijan’s Arjun Patiala