The 64th Filmfare Awards 2019 took place on Saturday, March 23 in Mumbai in the presence of many celebrities. From Ranbir Kapoor to Alia Bhatt, Ranveer Singh to Deepika Padukone, many were in attendance and some even took home the coveted awards. But, what happened backstage is something the fans would want to know. Varun Dhawan and Alia Bhatt, who are currently promoting their film Kalank, got a shoutout from Ranbir, Ranveer, Vicky Kaushal, Deepika. 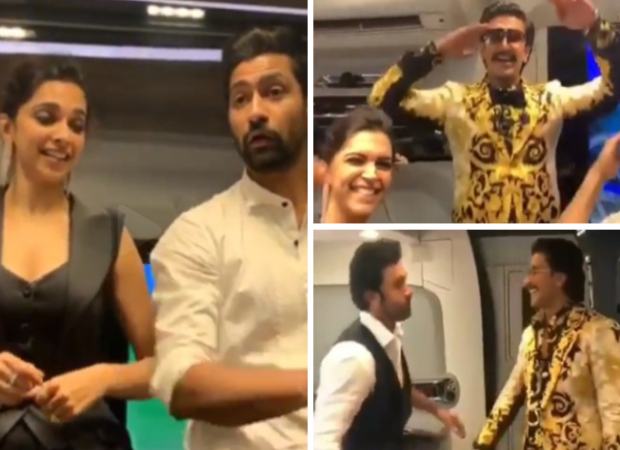 In the last ten days, two songs of Kalank have been released. One is 'Ghar More Pardesiya' featuring Alia Bhatt and Madhuri Dixit and other one 'First Class' starring Varun Dhawan and Kiara Advani in a guest appearance. In the Ranbir's trailer backstage at Filmfare Awards, Ranveer Singh was seen hanging out him while jamming to 'First Class'. Later, Deepika and Vicky too joined Ranveer as the trio gave a shoutout to their friend. Even Alia was filming Deepika, Vicky, and Ranveer while they showcased their traditional moves on 'Ghar More Pardesiya'.

Deepika even shared a photograph on her Instagram calling Vicky Kaushal, Ranveer Singh and Ranbir Kapoor, her favourite boys. While the three of them were lying on each other, she captured the moment and wrote, "All my favs in one frame."