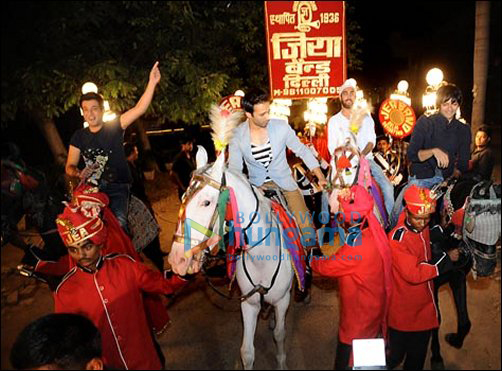 The upcoming Farhan Akhtar and Ritesh Sidhwani film Fukrey has been making headlines since the film's announcement. Being the first film that will feature newcomers the producers at Excel Entertainment are going all out to promote the film. In fact the makers recently held a grand launch of the film's music at Atmaram Santandharam College in Delhi which is known for their notorious students.

Farhan, Ritesh go all out to promote Fukrey

Interestingly, Ritesh and Farhan who also attended the event were to enter the college on horses. This decision was taken as the first shot in the promo is where the two boys - Hunny and Choocha enter in college on horses.

However, at the last minute, they took a call that the cast should enter on horses where as Ritesh, Farhan and the director Mrigdeep Lamba entered riding bicycles. Following this decision Pulkit Samrat, Varun Sharma, Manjot Singh and Ali Fazal entered on horses, while the girls Richa Chadda, Priya Anand and Vishakha Singh danced to the dhol beats.

Apart from this unique entry, the music launch even had LIVE performance by Ram Sampat, Ajmad and Sona Mohapatra.