This is one movie everybody is excited about - Ajay Devgn’s period action drama, Tanhaji – The Unsung Warrior. Starring him, Kajol, Saif Ali Khan and Sharad Kelkar, it is one of the most talked about movies of today. Full of magnificent action sequences (including a thrilling sword fight between Ajay and Saif), scintillating VFX (done by NY VFXwaala), emotions, and a glorious chapter of history full of courage, valour and immense bravery told through cinema - including the famous Battle of Sinhagad. Tanhaji is directed by Om Raut and produced by Ajay Devgn and Bhushan Kumar. Now we can give you some exclusive news on the movie!

Ajay and his team will launch the trailer of Tanhaji – The Unsung Warrior, on November 22 with Kumar Mangat and Bhushan Kumar’s Pagalpanti, starring Anil Kapoor, John Abraham, Arshad Warsi, Ileana D Cruz and Pulkit Samrat among others and directed by Anees Bazmee. Even though Ajay is fulfilling his other film commitments over the next couple of months, in his free time, he is busy getting the Tanhaji trailer ready.

A trade source says, “Om Raut’s Tanhaji – The Unsung Warrior promises to be a visual treat for those who love the grandeur and glory of cinema and Ajay and his team are sparing no effort to make it so. It is touted to be one of the best action and drama-packed emotional entertainers of 2020. The first trailer full of action will release on November 22 with Pagalpanti as it’s one of the most anticipated movies of the year. Pagalpanti is not just a comedy entertainer but will have John, Arshad and Anil is some memorable roles. Being a light-hearted entertainer, it is the best foil for Tanhaji trailer to come with and Ajay, Bhushan and Kumar Mangat felt it was the best time to release Tanhaji trailer.”

The source adds that it will be a gruelling schedule for the star for the next few months; the actor-director-producer is prepared for it. “Ajay is currently shooting for Maidan and the fly to Hyderabad by October end, to join Rohit Shetty and the Sooryavanshi team to shoot the climax with Ranveer Singh and Akshay Kumar. He will also shoot some scenes for Bhuj: The Pride of India this month, so it’s going to be a hectic couple of months for Ajay. He is currently juggling between shooting for Maidan and sitting in on the trailer (including VFX of the movie which is being done by NY VFXwaala, one of the finest studios in India) of Tanhaji – The Unsung Warrior. He’s hardly getting any sleep in between but as Ajay is overlooking the minutest details of the trailer, he is determined to finalise everything so it can be launched on November 22.” 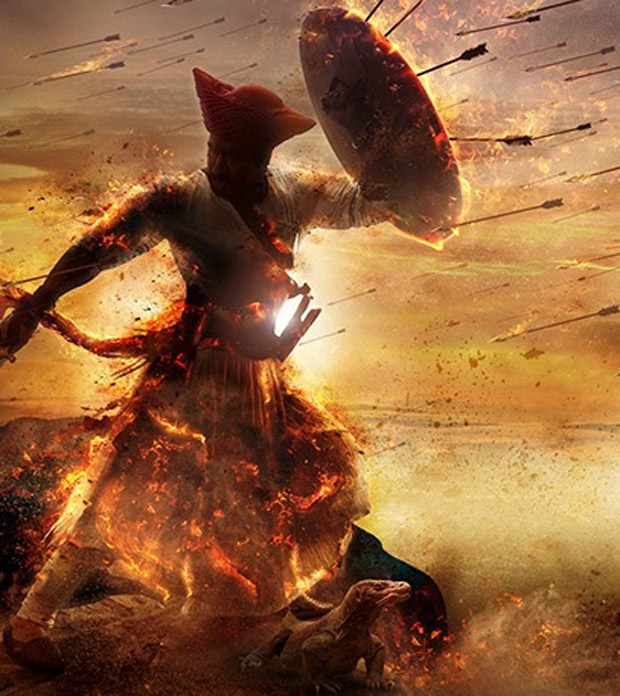 In Tanhaji – The Unsung Warrior, Ajay Devgn will be seen portraying the role of Tanaji Malusare – one of the greatest and bravest military leaders of the Maratha Empire who served in the army of Chatrapati Shivaji Maharaj and known for his capture of the Sinhagad Fort. Saif Ali Khan plays Rajput officer, Udaybhan Rathod, who served under Mughal army chief Jai Singh and Kajol will be seen as Lakshmi Bai. Ajay is pulling out all stops to make sure that Taanaji is one of the grandest action-emotion, period dramas the audiences have ever seen. Ace stunt coordinator/designer, Ramazan Bulut (and founder of Bullet Action Design) has designed some extra-ordinary, jaw-dropping action sequences in the movie, including the sword fight between Tanhaji and Udaybhan, during the Battle of Sinhagad.

Set in the 17th century, Tanhaji - The Unsung Warrior, is based on the life of Tanaji Malusare, who helped to recapture Kondhana fort near Pune from the Mughals. As a tribute to the bravery of Tanaji, the fort was renamed, Sinhagad (Lion's Fort) by Shivaji Maharj himself. Such was Tanhaji’s tale of courage and sacrifice that ballads and stories have been written on him. Famous filmmaker V. Shantaram directed the Marathi historical, Sinhagad (1933), based on Hari Narayan Apte's novel Gad Ala Pan Sinha Gela (I Won The Fort But Lost A Lion).