Farah Khan completed 30 years in the industry as a choreographer on May 22. She started her career in Hindi films with Jo Jeeta Wohi Sikandar (1992) and it helped her make a mark. She then never looked back and has worked on several iconic songs.

EXCLUSIVE: Farah Khan completes 30 years in Bollywood; reveals why Anil Kapoor and she call ‘Papaji’ to each other; and why Sushant Singh Rajput’s Dil Bechara title song was shot in one take

Bollywood Hungama exclusively spoke to her on the occasion of her 30th anniversary in Bollywood. We went down memory lane and asked about her some of her memorable tracks and her experience. She has too many memorable songs in her filmography and since talking about each of them was practically impossible, we picked out a few of them that were worth talking about, for their uniqueness and because most of them were not the usual dance numbers.

An unconventional song in your filmography was ‘Sandese Aate Hai’ from Border (1997). How was it to choreograph that track? After all, it was about soldiers and they can’t break into a typical dance step…
It was very tough (laughs)! They couldn’t march on the beat as well. They were marching on their own beats. They understood my instructions but they just couldn’t do it. Moreover, it was extremely hot. I used to keep rozas at that time. I used to be in a different state while shooting that song in the desert. However, every time the song would play, everybody would start crying. The soldiers, the actors and even I would start crying, as it was such an emotional song. We shot it for more than 5-6 days as it’s a very long track. Each actor’s story was there in the song.

That’s the only time I worked with director J P Dutta. Everybody had scared me that he was very difficult and stern. However, he was lovely to me. We have a great rapport even now. He was very nice to work with.

Another such song that I can recollect is ‘Ek Ladki Ko Dekha’ from 1942: A Love Story…
Sanjay Leela Bhansali and I used to write the whole script. It’s more difficult to do songs that don’t have the dance in them. Though my dance songs have become huge hits as they were easy to do like Sheila Ki Jawani, Munni Badnaam etc.

Anil Kapoor is featured in this song. Why do you and he call each other ‘Papaji’?
Both of us are mad! Anil didn’t want me for choreography. He thought I am too young and he preferred to work with Saroj ji. And rightfully so as she was so good. Vidhu Vinod Chopra and Sanjay however wanted a lot of time from the choreographer. They wanted someone to be present throughout the song shoot and not run away in the middle to a different shoot. So when I explained to Anil what he’s supposed to do in the song, he liked it and hence he said, ‘Papaji, tussi great ho’! Then after every shot, he’d call me ‘Papaji’. Then I also started calling him that. And he’d touch my feet and I’d also touch his! Ever since we are close friends. It’s been 30 years and we are still ‘Papaji’ to each other (smiles).

The song ‘Woh Ladki Hai Kahaan’ in Dil Chahta Hai is remembered even today…
That song was supposed to be a love song. We had already shot the dance number ‘Koi Kahe’. I was dreaming that I’d won all the awards for this song as it was a very well choreographed track with all these three guys and shot intricately. Meanwhile, ‘Woh Ladki Hai Kahaan’ was going to be along the same lines as ‘Jaane Kyun Log Pyaar’. We were in Australia and I told Farhan Akhtar, ‘Yaar, one more love song? Fir yeh dono salad khaayenge, fir chalenge’. However, he reasoned that he wanted to show how their relationship progresses and they go on dates. I suggested that what if they go to see a movie and in that movie, they see themselves; then we can do what we want with the song. The costume designer then asked, ‘in their on-screen avatar, are they in their 60s?’ That gave us a great idea. So, we all brainstormed and then we made it like a song covering different eras and decades in cinemas. For the 50s, we wanted a set similar to the one in Guru Dutt’s Pyaasa. In the 60s, people were always on cycles and so we incorporated that as well.

‘Munni Badnaam’ from Dabangg (2010) is known for Malaika Arora’s avatar. However, I believe Sonu Sood was given a free hand to dance as per his wishes…
Yes, and I shall take no credit to choreograph his part. I wanted it to look like a guy who can’t dance. It wouldn’t have looked authentic had I choreographed his moves. So, I told him that he was free to do what he wants. So when ‘Munni Re’ is played, he went into a different zone. He then said ‘Main sabko bolunga ki yeh aapne choreograph kiya hai’. I was like ‘No, you can’t tell anyone that’ (laughs)!

You also worked with an international star like Jackie Chan, in Kung Fu Yoga (2017)…
He was fabulous. He had a great sense of rhythm and timing as he does action, although a lot of action heroes can’t dance. He was, however, very good. For a 7:00 am shift, he’d reach the sets at 6:30 am. He’d check the arrangements and help with the trolley. Everyone would be on their toes and hurry up seeing him on the set. He would be involved in everything. It was not like we were waiting for him to come. He would also be very happy to feed everybody after the shoot and throw parties. He’d call us for dinner and serve himself. So, he was lovely. 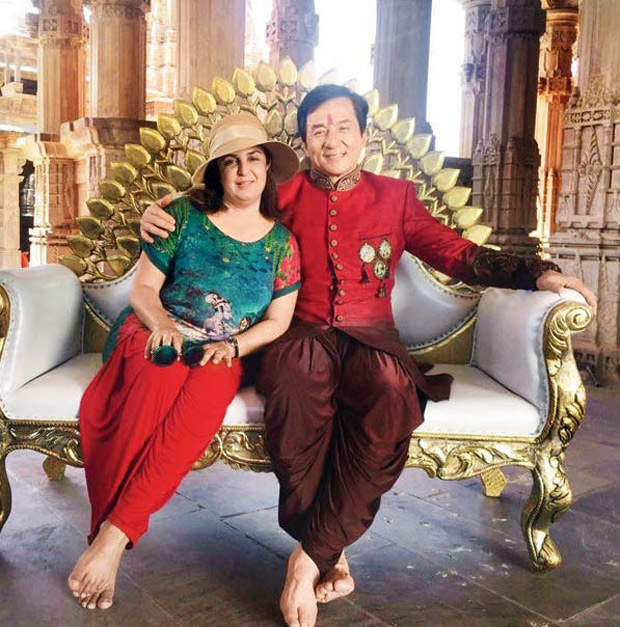 The title track of Dil Bechara (2020), featuring Sushant Singh Rajput, was shot in one take. Was the Main Hoon Na (2004) song, ‘Chale Jaise Hawayein’ the inspiration behind it?
No. In Main Hoon Na, I wish I could have done the whole song in one shot. My inspirations are always Vijay Anand. He used to take these very long shots. While doing my shot breakdowns, I used to see his songs. That time, without any jimmy jib or Steadicam, he used to pull it off. So he’s been my inspiration.

Dil Bechara’s director Mukesh Chhabra calls me ‘didi’. I tie him rakhi. He wanted me to do. Sushant and I were very friendly with each other. He used to come to my house for all my lunches and parties. I was very fond of him. So, I was like ‘Chalo, Sushant ka gaana hai toh I’ll do it’.

When I heard the song, I didn’t like it at all! I asked Mukesh, ‘Iss gaane pe dance kaise hoga?’. He reasoned, ‘Nahin didi, yeh gaana sabko accha laga hai’. My idea was that for 3 days, I can’t shoot this song. So I was like ‘Let me do it 1 in shot. So in just 1 day, we’ll complete the song shoot and I’ll be free’ (laughs)! Moreover, I knew Sushant would be able to do it in one shot successfully. I got my last Filmfare Award for this song.

Also Read: Did Farah Khan just reveal that she had a crush on Ananya Panday’s father Chunky Pandey?