On August 31, the annual Venice Film Festival started its 79th year of proudly celebrating Cinema from around the world. And this 2022 marks its 90th anniversary. There’s no shortage of star power on the Lido this year. The 79th Venice Film Festival boasts such boldface names as Timothée Chalamet — along with his fellow the Bones And All cast mates and filmmaker Luca Guadagnino — Cate Blanchett, Alejandro G. Iñárritu, Adam Driver, Brendan Fraser and Sadie Sink from The Whale and dozens more. But the buzziest premiere of all might be that for director Olivia Wilde’s Don’t Worry Darling, which saw Wilde walk the red carpet along with co-stars Florence Pugh, Chris Pine and Gemma Chan and Harry Styles. 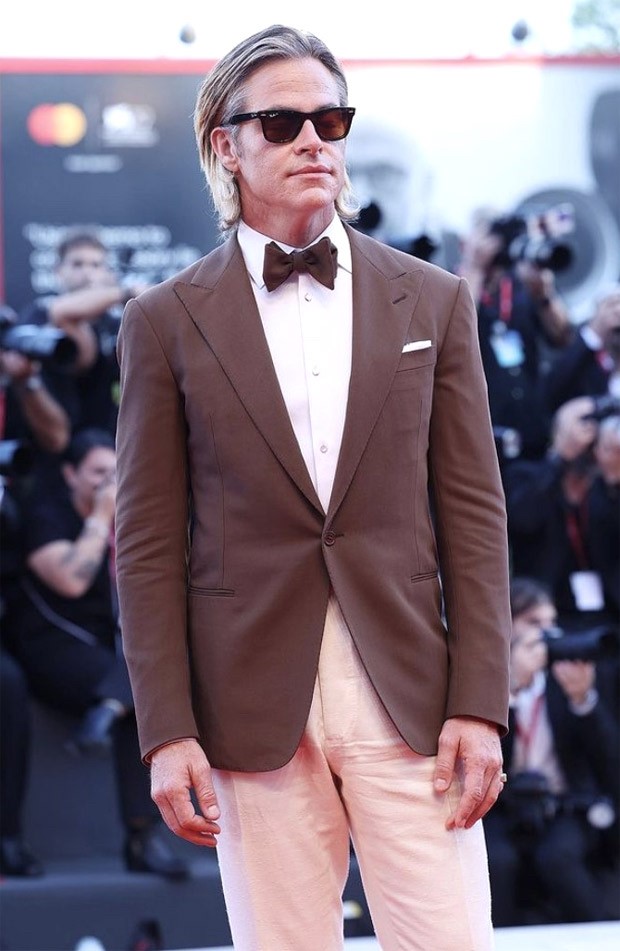 A-list celebrities from all over the world have descended on Venice to take advantage of the remaining summer days and promote their newest movies. While Don't worry Darling cast members Florence Pugh, Chris Pine, Gemma Chan, and Harry Styles have already drawn attention on the 90th Venice Film Festival red carpet. Here’s a roundup of their looks

Harry brought his own flair to the event, wearing a Gucci navy double-breasted suit. Styles appeared in a royal blue jacket with high shoulders and boxy tailoring around his torso. His pants were loose fitting in a slightly darker hue. Under the jacket, he wore a light blue shirt with exaggerated lapels that came down in long points over his suit. He wore the look with white leather shoes and oversized sunglasses 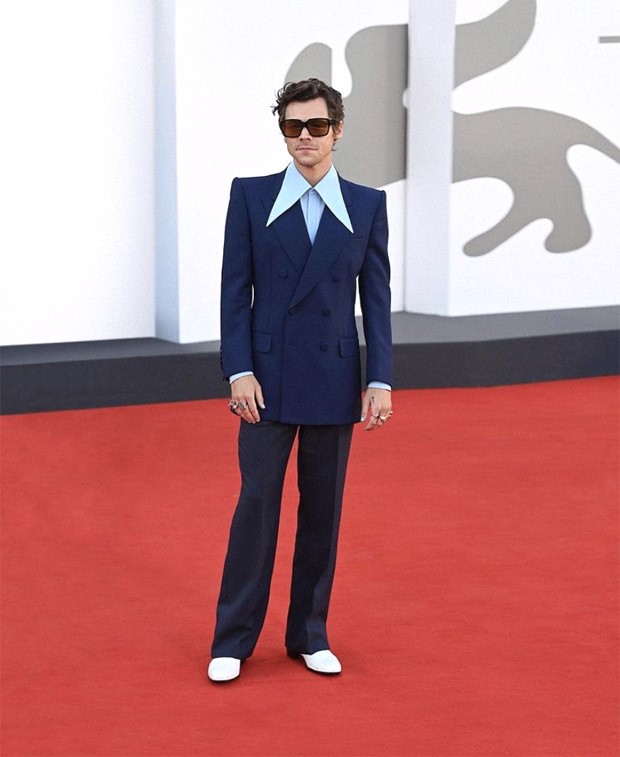 The Don’t Worry Darling actress Florence Pugh wowed in an off-the-shoulder, black tulle gown by Valentino for the movie’s premiere at the Venice Film Festival Monday night. Florence Pugh dazzled in an off-the-shoulder, black tulle gown by Valentino. In the shimmering dress with its gorgeous split front and balloon-style sleeves, Florenc jie posed with confidence. She walked the red carpet wearing a translucent overlay that was embellished with silver stars and rounds strewn throughout. She wore a black bandeau bra top underneath and high-waist boy shorts with the same sequin design. She paired her dazzling gown with black heels that had a bow at the ankle and stunning feather trim extending up her legs. She styled her hair simply in a slicked-back wave. Pugh significantly increased the brilliance with many Tiffany & Co. jewels. She wore an aquamarine and blue spinel ring, two sets of diamond earrings, and a platinum and diamond collar necklace. 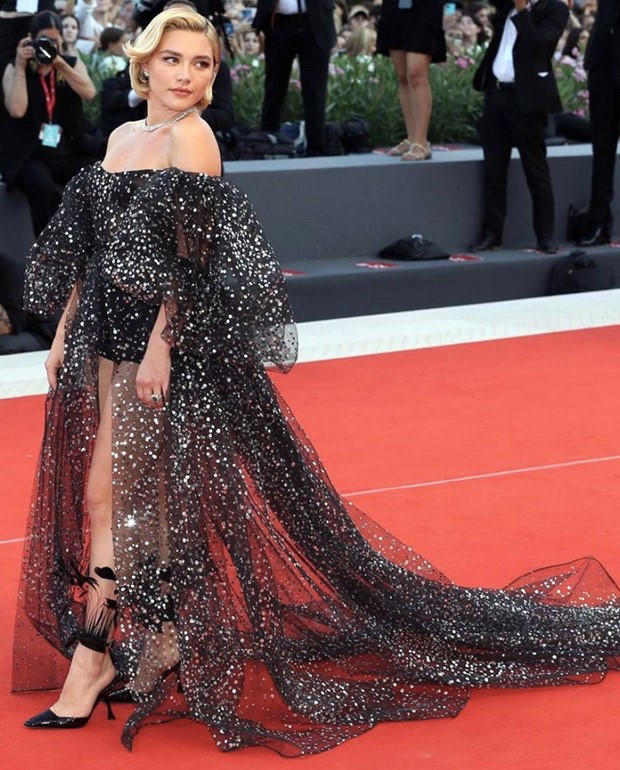 Gemma Chan donned a 3D floral Louis Vuitton dress with a high gloss. When Gemma Chan attended the Venice Film Festival premiere of her new film Don't Worry Darling on Monday, she put up a dazzling display in a dress covered in sequins. Gemma's silver dress had a cross-over high neck, a sleeveless cut, and a figure-hugging shape. Tiny gold patches were scattered throughout the sequin-covered fabric. She let two parts of her brunette hair down to frame her face while neatly pulling the rest of her hair up into a high bun. The Crazy Rich Asians actress chose a golden makeup look that included a brown smoky eye and a delicate nude lip. She completed her look with a large silver metal bracelet, matching rings set with diamonds, and striking diamond earrings. 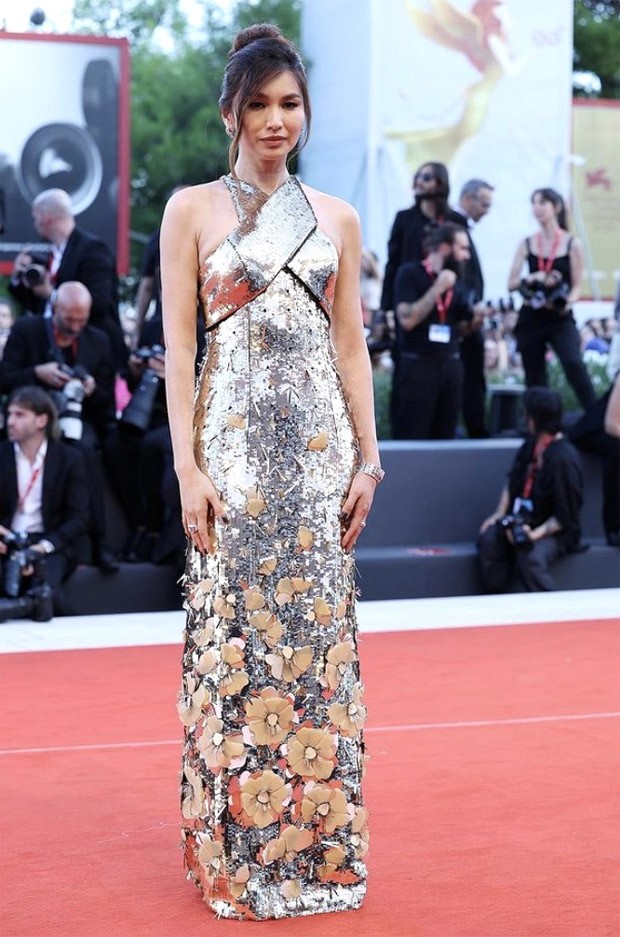 Chris Pine, who plays Frank in the upcoming film, and co-star Gemma Chan arrived on site by boat to the picturesque setting. Chris chose to wear taupe pants, a tuxedo shirt, and a chocolate brown jacket. The actor debuted a clean-shaven appearance for the event, matching a brown bow tie and matching shoes. Prior to the event, he and Gemma, who portrays Shelley in the movie, posed for pictures together, with the beauty fixing Chris' tie.