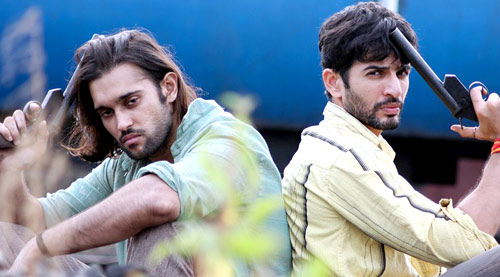 From Jai and Veeru, the tale has moved on to Jay and Akhil now. If Sholay featured the two much loved characters as trigger happy rogues, things are getting much serious in Desi Kattey where Jay Bhanushali and Akhil Kapur are getting to explore their shooting skills in different arenas. If former plays the part of a goon turned sports champion, latter finds himself in a dilemma when it comes to taking forward his sharp shooting skills.

All of this is happening this friendship season where Anand Kumar, the man who came all guns blazing with his Sanjay Dutt led multi-starrer Zila Ghaziabad, is going all out to let the world know that his tale of Desi Kattey is far removed from the numerous underworld sagas told by Ram Gopal Varma and instead finds itself in a unique territory which sees bullets changing direction and hitting the right spots in the arena of sports.

Says Anand, who started his career with a much somber Delhi Heights (Jimmy Sheirgill, Neha Dhupia) a few years back, "Desi Kattey is basically a story of two young boys who are best friends. They live together in a boat on the banks of Ganga and gradually find themselves working in this 'katta' (local gun) making factory. Since their job profile also requires them to test these 'kattas', their skills are nurtured to such an extent that they become wonderful shooters."

Ironically, they never realize their true worth unless Suniel Shetty comes in their lives and inspires them to make their wrongs right and find respectability in an alternate world where shooting is respected as a sport instead of facilitating the killing human beings.

"They don't even realize that they are shooters in the true terms as all they had done so far was in the form of work for underworld," says Anand, "They are on crossroads and this is what brings out their true character and self worth."

For Anand, who has also been at the helm of a social affair in the form of Manoj Bajpayee starrer Jugaad, the film stays on to the most intimate story told by him due to reasons more than one.

"I always wanted to make a film about friendship. Reason being that till date my school friends are very important to me. Their opinion on the films that they watch and what they expect from me is so very important. While telling them about Desi Kattey, there were so many inputs and anecdotes that I recollected; I have tried to incorporate most of them in my film."