The Broadcast Film Critics Association and the Broadcast Television Journalists Association hosted the annual Critics Choice Awards 2022 on Sunday night, honouring excellence in film and television from the previous year. The televised event, held between the Fairmount Century Plaza Hotel in Los Angeles and the Savoy Hotel in London, showcased some of the most notable fashion trends. The event was hosted by Taye Diggs and Nicole Byer. In the most prestigious categories, Power of the Dog, directed by Jane Campion, won the best picture at The 27th Annual Critics Choice Awards, and Belfast was also a multiple award winner. 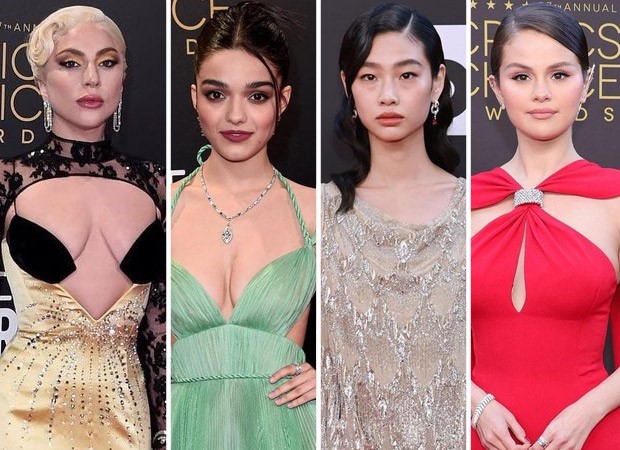 On the television side, Succession, Mare of Easttown, and Ted Lasso won honours, with the latter taking home the most with four victories. There were some star-studded appearances on the red carpet, with wonderful moments and stunning style. We chose a few of the night's finest dressed stars that caught our eye.

RACHEL ZEGLER
Rachel Zegler donned Dior Haute Couture aquamarine off-shoulder pleated ball gown with draped shoulder and back tie by Rachel Zegler. The ensemble was finished with Dior shoes, Tiffany & Co. jewellery, and a Tyler Ellis clutch. Rachel came with one strand of her black hair pulled back into a tight bun in the front. With a dusty greenwashed eye and berry tone lipstick, the actress maintained her makeup fresh and ethereal, perfectly matching her skin and warm tones, and creating a beautiful look for the night. Rachel Zegler's look was styled by Sarah Slutsky.

SELENA GOMEZ
Selena Gomez was nominated for Best Actress in a Comedy Series at the 2022 Critics Choice Awards for her performance in Hulu's smash hit, Only Murders in the Building. Selena Gomez made her debut at the red carpet in a stunning red Louis Vuitton gown. The halter gown by Louis Vuitton included a long scarf as a train and crystal accents at the neckline. A Boucheron diamond arrow earring pierced through her cartilage completed the outfit. A sleek side-parted ponytail accentuated the appearance. Hung Vanngo, Gomez's makeup artist, created a bright rosy beauty moment with several items from her Rare Beauty cosmetics collection including Stay Vulnerable Liquid Eye Shadow in Nearly Rose, Soft Pinch Dewy Liquid Blush in Hope, and Stay Vulnerable Liquid Eye Shadow in Nearly Rose. She elevated her look with Gianvito Rossi heels and dark-tinted nail paint by Essie. Stylist Kate young took the gram and posted Selena's pictures.

LADY GAGA
Lady Gaga's fashion sense is strongly based on her artistic nature; she has a propensity of evolving, as seen by her appearance on the Critics' Choice red carpet when she swapped her bafta gown for a dare to a bare gown. Gaga wore a black-and-gold Gucci gown created by Tom Erebout and Sandra Amador as she walked the red carpet with her lover. Gaga was dressed in a provocative black adhesive bra-like top. Over the body-shaping diamonds and black sequin accent on the deep-cut gold dress, she added an edgy translucent lace shrug. The House of Gucci actress had her hair up in vintage curls, which echoed the classic Hollywood look she wore hours earlier at this year's BAFTA Awards, and she donned diamond earrings and a diamond bracelet, from the 2022 Tiffany Blue Book Collection. Lady Gaga pulls off looks that are worth remembering.

JUNG HO YEON
At the 2022 Critics' Choice Awards, HoYeon Jung is having yet another great fashion moment. The "Squid Games" actress wore a metallic beaded dress from Louis Vuitton's spring 2022 ready-to-wear collection on the red carpet Sunday night. The gown had a flowy bodice and a dramatic bustle skirt with crystals and silver beads. She finished her ensemble with Louis Vuitton's High Jewellery Collection earrings and a ring, as well as basic black heels. The squid game actor opted for princess waves for a more feminine aesthetic. She was styled by Aeeri Yun, a new york-based stylist, and her make-up was kept simple, with a pink rose lip tint and flushed cheeks achieved using Chanel beauty cosmetics and nail polish that matched her clothing.

ELLE FANNING
On Sunday, Elle Fanning wore a gold gown to the 27th annual Critics' Choice Awards in Los Angeles. In an Oscar de la Renta champagne-coloured ballgown, the "super 8" actress made quite a statement. The strapless dress had sheer embellishments on the hem and was gently tightened at the waist. Fanning completed the look with stud earrings and a chunky gold bracelet. The "Maleficent" actress wore winged eyeliner and a dramatic crimson loreal lipstick. She wore her hair down in a short ponytail to allow her outfit to do all of the talking. The actress completed her ensemble with gold Jimmy Choo Anouk pumps. The satin silhouette complemented her gown well. The stylish design has a 4-inch heel and is lined in leather for comfort. Samantha Mcmillen and Jenda were behind Elle's unique look.

KRISTEN STEWART
In a slinky silver gown, the actor, 31, who was nominated for Best Actress at the Critics' Choice Awards 2022 for her part in Spencer, was a sight to behold. Kristen looked stunning in a silky dress that clung to her amazing figure from her toned waist to her slender legs. Her eye makeup, a dark coat stroke above her emerald eyes, added even more drama. Messika diamonds statement rings and bracelet completed her ensemble. Using Chanel beauty cosmetics, she kept her make-up simple with nude nail polish, accentuated cheekbones, and a cocoa hue lipstick.

ANDREW GARFIELD
At the 2022 Critics' Choice Awards, Andrew Garfield flexed his Ysl bespoke velvet suit with a little glitter made by Anthony Vaccarello. A straight-fit jacket with a notched collar and wide flowing velvet black pants, the "Yves" collar shirt in black-matte silk with a glittering stripe, and Saint Laurent's Vassili Chelsea leather boots with a Cuban heel make up the ensemble. Andrew wore an Omega constellation yellow gold watch from David Yurman's line ring, and he looked clean and classic. Andrew Garfield appeared to be at ease.